Editor’s Note: The Scratching Post is a column that’s sponsored and written by the staff at NOVA Cat Clinic.

Does your cat go crazy for catnip? Does he roll in it or eat it? Does she fall into a daze after rubbing on her favorite catnip-filled toy? Or have you been wondering what the fuss is all about because your cat walks right past the expensive organic catnip you bought? 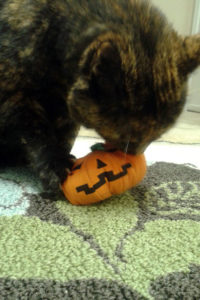 The catnip plant (Nepeta cataria) is a member of the mint family that originated in Europe and Central Asia. The plant contains an essential oil called nepetalactone that acts as an attractant for many cats (as well as butterflies).

Not all cats are affected by nepetalactone; in fact, only about half to two-thirds of cats enjoy the “catnip crazies.” The response to catnip is an inherited trait, and kittens are not affected by it until they are older than 8 weeks. Big cats such as tigers and leopards can also be attracted to the plant.

The effects of catnip can last from five to 15 minutes, after which time the cat’s olfactory receptors (cells in the nose that detect scents) are fatigued and therefore not susceptible to the nepetalactone.

Although butterflies (and cats) are attracted to catnip; mosquitoes, cockroaches, and other insects are repelled by it.

Researchers have found that smelling catnip causes the “crazies,” while eating the plant has a relaxing effect. The effects of catnip have been compared to either LSD (hallucinations) or marijuana (relaxation) use in humans. Some people even steep catnip in tea for a relaxing herbal remedy, similar to chamomile tea!

How does your cat react to catnip? Send us photos of your cat enjoying catnip to [email protected], and your cat may be chosen as our next cat of the week. Pictured above is Dr. Wootton’s cat, Lucy, enjoying a potent catnip-filled toy from the Yeowww! product line, available for purchase at NOVA Cat Clinic.