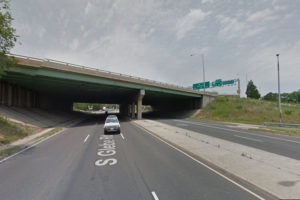 The bridge that takes I-395 over S. Glebe Road is slated to be renamed for Virginia State Trooper Jacqueline Vernon, who was killed in 1988 during a traffic stop on the interstate.

The Arlington County Board passed a resolution asking the General Assembly to rename the bridge in Vernon’s honor. Vernon was killed Aug. 4, 1988, after pulling over an HOV violator on a nearby stretch of I-395 when, while speaking to the driver, a Metrobus struck and killed her.

Vernon, who was born in West Virginia during segregation in 1955, was the first woman and first African American Virginia state trooper to be killed in the line of duty.

The resolution erroneously calls for “the Glebe Road bridge over I-395” to renamed, but there is no such bridge. According to the county’s legislative liaison to the General Assembly, Pat Carroll, there was a mistake in the resolution, and the I-395 bridge over Glebe Road is what’s actually expected to be renamed.

Vernon’s family was in attendance during the resolution on Tuesday afternoon, and County Board Chair Jay Fisette read a letter written by Vernon’s brother, Ron, transcribed after the jump.

Vernon’s family had been trying for years to get a bridge or stretch of road named after her, and their efforts appear likely to pay off. Fisette said he “can’t imagine” the General Assembly wouldn’t approve of naming the bridge after her during their 2015 session.

After the jump is Ron Vernon’s letter, “Sacrifice.”

Trooper Jacqueline “Jackie” Vernon was born to a coal miner father and a housewife mother on Nov. 4, 1955 in a small town in West Virginia named Carretta. Jackie was born the fifth child of five children, born to parents who believed that the only escape from poverty was education.

Carretta was a typical southern town during segregation, with a population under 500. The neighborhoods were arranged with black and white families in different parts of the community. The blacks were crammed into spaces that white didn’t want, their houses were inferior, their roads were unpaved and their futures were bleak.

This was Jackie’s introduction into society. As she grew older, Jackie first attended Carretta Negro Elementary School, a one room school where one teacher taugh six grades with used books and hand-me-down materials. Jackie could never understand why she couldn’t go to school with the other kids.

Before Jackie finished elementary school, de-segregation came to West Virginia, but instead of de-segregation becoming her rescue, it became another battle. Jackie’s new battle was going to school with kids and teachers that didn’t want her in their school. Somehow, despite the obstacles, she made it through and graduated.

Shortly after graduation, Jackie joined the Army in the hopes of escaping the poverty and oppression of being born into a segregated life. Although Jackie excelled in her given field of transportation, she found resentment and exclusion from male soldiers, who disliked the idea of being shown up by a woman. Jackie served one tour of duty before leaving the military.

She finally landed a job as a police officer for the city of Gary, West Virginia. Jackie had found her calling. She was thrilled at the idea of serving the public. For the next few years, she learned as much as she could from her fellow officers and finally became a training officer herself. For once, she wasn’t a black or a woman, but a police officer. She loved it.

She spoke of service to the community and one incident in particular. One night while on duty, she came upon an elderly lady that had a flat tire. The lady did not belong to a motorist club nor did she have anyone in the vicinity to call for help. Jackie said she thought of her mother being stranded with no one to help. She got out of her cruiser, rolled up her sleeves and changed the lady’s flat tire, and sent her on her way.

It wasn’t anything big for most of us, but it defined who she was. During her brief, four-year career as a trooper, Jackie was awarded 11 commendations for service to the public.

Sadly, a little more than four years after becoming a trooper, fate stepped in and ended Jackie’s career with the ultimate sacrifice. On Aug. 16, 1988, during a routine stop of an HOV violator, an errant Metro driver distracted by a passenger lost control of his bus and hit Jackie, who died of injuries within hours of the incident.