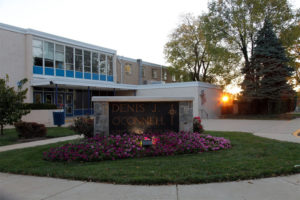 An alumni group is asking the Vatican to look into a slew of incidents they say has tarnished the private Catholic school’s reputation.

The group, led by former basketball player Brian Culhane, has sent a “fat package of allegations and grievances” to the Congregation for the Doctrine of the Faith, which oversees issues of morality in the Roman Catholic Church, according to an investigative report by the sports gossip website Deadspin.

The allegations surround the varsity basketball team and its head coach, Joe Wootten.

According to Deadspin, Wootten allowed since-convicted heroin and cocaine trafficker Curtis Malone, the founder of the amateur hoops powerhouse D.C. Assault, to practice and visit the school.

Deadspin reports that Wootten sought the transfer of Congolese basketball player Junior Etou, who was the key figure on the team’s 2013 Washington Catholic Athletic Conference championship. The site found that Etou was very likely 21 years old when he played for O’Connell, two years too old to be eligible for high school play.

The report also alleges a cover-up by school officials after two basketball players allegedly filmed a sex act with a female student at the school. The players transferred before the last school year. Via Deadspin:

The talk was that Wootten’s latest exiles had left under an ugly cloud — that one of the players had shot a video in which a female student performed oral sex on the other player inside the school, then, according to an O’Connell employee, “posted his work on Instagram.” All of those alleged to be involved were juveniles and underclassmen.

Students found to have committed what is described in memos from O’Connell alumni to school and local Catholic officials as “a sexually immoral act” on campus are generally expelled, Culhane says; however, according to the rumors, the two boys were allowed to leave without any formal finding, while the girl alleged to have been involved remained enrolled at O’Connell. Culhane says alums who inquired about the incident were told by school administrators that she faced no punishment because “the [sex] act was not consensual.” Yet no charges were ever filed.

The Arlington County Police Department investigated the video, but spokesman Dustin Sternbeck said no charges were filed and the identity of the subjects could not be revealed because they were minors.

The confluence of events — without a satisfactory response from O’Connell administration of the Catholic Diocese of Arlington — prompted Culhane and his alumni to request Pope Francis step in. If the CDF and the Vatican decide it’s worth pursuing, according to Deadspin, it will compel Bishop Paul Loverde to investigate the school and the program.

O’Connell administration has not responded to a request for comment.

Update at 4:20 p.m. — The Catholic Diocese of Arlington has provided ARLnow.com with the following statement:

The Diocese of Arlington regrets that concerns about the basketball program at Bishop O’Connell remain a source of frustration for some members of the school community.

As stated previously in 2013, Bishop O’Connell received official documentation regarding the age of former student Junior Etou, confirming his eligibility to participate in athletics during the 2012-13 academic year.

With regard to any allegations involving other students, the Diocese of Arlington cannot comment on individual disciplinary matters. As a matter of policy and practice if a school has reason to believe a student’s actions have violated the law, the proper law enforcement agency is contacted.