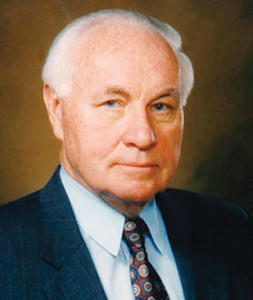 John McEnearney, the founder of the D.C.-area real estate broker McEnearney Associates, died yesterday at the age of 87.

McEnearney founded his real estate company in 1980 in Alexandria, and it has since expanded to 12 offices, offering residential and commercial real estate, plus property management services. McEnearney’s Arlington office is 4720 Lee Highway.

The company is ranked as one of the top 75 real estate firms by sales volume in the United States.

McEnearney served as an officer in the U.S. Navy for 27 years, according to a company-produced obituary, and is expected to be buried at Arlington National Cemetery later this year. Below is the full obituary, written with “input from the McEnearney family.”

John McEnearney, the chairman and founder of McEnearney Associates, passed away on October 8 at the age of 87.

Born Nov. 8, 1926, McEnearney graduated from the United States Naval Academy in 1949 and served on active duty as a Naval officer for 27 years. During his time in the Navy, his tours of duty included such diverse and interesting places as Korea, Antarctica, Puerto Rico, Hawaii, Brooklyn and Washington, D.C. During two years’ service in Vietnam, in direct support of the U.S. Marines, he was awarded the Bronze Star Medal for Valor, presented to him personally by four-star General Lewis Walt of the United States Marine Corp.

The day following his retirement as a Navy Captain in 1976, McEnearney joined a residential brokerage firm in Alexandria, Va. His performance during his three years as an agent qualified him as one of the top real estate professionals in Northern Virginia. He went on to acquire his broker’s license and founded McEnearney Associates.

McEnearney opened the first office of McEnearney Associates, Inc. in 1980. Initially, his firm specialized in marketing fine residential properties in Old Town Alexandria. Over the years, McEnearney Associates has expanded to seven residential offices, a commercial office, a Relocation Department and three locations for Property Management. The firm now serves the entire metropolitan Washington, D.C., area and is consistently ranked among the 75 largest real estate firms by sales volume in the United States. The focus remains on marketing fine residential properties throughout the area.

“When my father founded McEnearney Associates more than 34 years ago, his goal was to gain the respect of the public and to provide real estate services that are second to none,” says Maureen McEnearney Dunn, president of McEnearney Associates. “His devotion and loyalty to the company and our associates, clients and customers is a testament to the major contributions and success of the firm throughout the years. John absolutely loved everything about the real estate business and was completely devoted to his agents and staff.”

For more than 30 years, McEnearney Associates, Inc., has set professional standards for service in the Washington area real estate industry. McEnearney was one of the first brokers to recognize real estate agents for the professionals they are, encouraging continuing education and higher standards, providing a professional work environment and developing effective and comprehensive marketing programs that support the Associates’ efforts to provide exceptional service to their clients.

According to family and friends, McEnearney preferred face-to-face or telephone conversations over voice mail or email, though he did develop a reputation for thoroughly researched letters and giving his honest opinions. Described as a smart and generous man, McEnearney earned a highly valued reputation for exceptional service and outstanding performance in the real estate industry and in the community. Always invested in the personal and professional wellbeing of his agents, McEnearney created a family firm in which everyone is a part of the family.

He served on the Board of Directors of the Northern Virginia Association of REALTORS and was recognized as Businessman of the Year by the Alexandria Chamber of Commerce in 2006. McEnearney was an active supporter of more than 50 organizations, including The Hopkins House; Stop Child Abuse Now (SCAN); Alexandria Senior Services; and Children’s National Medical Center. His personal contributions to so many organizations were in addition to his philosophy of corporate giving from the company.

McEnearney was preceded in death in 2009 by his wife Ginny, and is survived by their six children — Sean, Sharon, Mark, Maureen, Mike and Kathy — as well as 11 grandchildren and five great-grandchildren.

In lieu of flowers, charitable contributions can be made to Capital Caring (formerly Capital Hospice) and So Others Might Eat. A funeral mass will be held on Friday, October 17 at 11:30 a.m. at Saint Luke Catholic Church, 7001 Georgetown Pike, McLean, VA 22101. Burial at Arlington Cemetery with full military honors will be scheduled for later in the year.