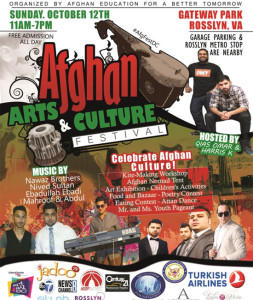 The 5th annual Afghan Arts and Culture Festival will take over Gateway Park in Rosslyn all day this Sunday.

Running from 11:00 a.m. to 7:00 p.m., the festival features live music from Afghan artists, traditional Afghan food and a bazaar featuring vendors plying wares that you might find in one of the street markets in Afghanistan.

The festival is hosted by Afghan Education for a Better Tomorrow (AEBT), a California-based nonprofit focused on promoting Afghan culture in the U.S. and raising awareness of the rebuilding efforts in Afghanistan.

“It is an opportunity for the Afghan diaspora to share their rich culture and history that is not often portrayed in the western media,” Maryam Rashid of AEBT said in a press release. “As the largest Afghan-American event in the D.C. region, this festival provides an opportunity for positive cultural exchange, and embracement of ethnic and cultural diversity.” 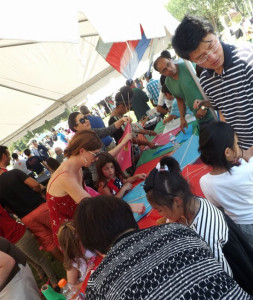 The event includes kite-making workshops for children, a “nomad tent” where visitors can try on Afghan clothing and jewelry, a fashion show and a Mr. and Miss Afghan contest open to boys and girls in two age groups: age 2-4 and 5-7. There will also be several Afghan artists displaying their paintings and sculptures.

According to the event website, there will also be an eating contest, but not of hot dogs: contestants will wolf down some mantu, which are dumplings filled with beef and onions.

There will also be live music throughout the day with performances by Afghani artists Mahroof, Abdul Faqiri, the Nawaz Brothers, Larmal Wasiq, Nived Sultan, Ebadullah Ebadi, Zia Beghoman, Nomad Dancers, an Afghan dance troupe, with hosts Qias Omar and Harris Khattak, according to the press release.