The Arlington County Police Department needs to hire more Latino and bilingual officers, according to one community group.

BU-GATA, a nonprofit that advocates for tenants rights and Latino issues, issued a statement during ACPD’s community outreach meeting last night asking the ACPD to step up its hiring practices so its department reflects the demographics of the community it serves.

“[The] lack of Latino, Spanish-speaking police officers is a major problem,” the group’s statement says. “In Arlington where 15.3 percent of the population is Latino, only 6-8 percent of the police force is Latino.”

The group charged that the lack of a “Latino, go-to liaison within the police department” and the lack of professional interpreters at community meetings have helped foster a “lack of trust between police officers and community members.” 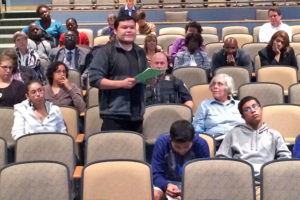 “There continues to be great concern in the Latino community about rising numbers of Latinos being stopped and arrested by Arlington County police,” BU-GATA states. The ACPD only compiles demographic statistics based on “white” or “black” arrests, with Latinos largely grouped into the white demographic, an issue BU-GATA says should be rectified for a broader analysis of why Latinos are arrested at a higher rate than other demographics.

BU-GATA analyzed arrest data from 2011, it said, and found that Latinos made up for 23 percent of all those arrested in Arlington, based on “Spanish last names.” Many of the arrests were for one of three crimes: drunk driving, driving without a license and drinking in public.

Arlington County Police Chief Doug Scott responded to the call for hiring more Latino officers with an acknowledgment that the ACPD can do a better job.

“Our numbers of Latino officers may not be exactly where we want to be, but more and more we’re recruiting officers who are bilingual, so we’re trying to address some of those issues,” Scott said. “We do our best to have a police department that reflects the community that we serve.”

The ACPD offers incentives for bilingual officers, but BU-GATA said it does not do enough outreach to find bilingual candidates. The police department also has a standard of two years of college for its officers, which it recently has decided to waive for some with military or prior law enforcement experience.

BU-GATA said Arlington could create a “basic patrol” position, which other jurisdictions have, in an effort to hire more Latino officers who don’t qualify for the education requirements. After being hired, the “basic patrol” officers could then be reimbursed for tuition costs, the group proposed.

Scott said that although the numbers don’t fully match up demographically, he’s pleased with the department’s recruitment and diversity efforts. He said federal and local law enforcement agencies in the D.C. area are all competing to recruit Latino officers.