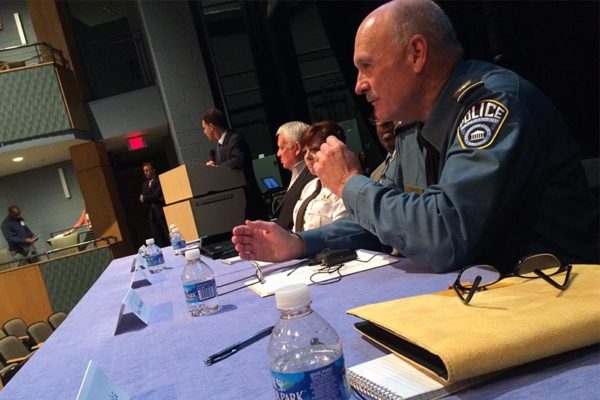 Could another Ferguson happen in Arlington?

Scott and other local law enforcement and community figures were speaking at a community forum on policing last week at Wakefield High School when he was asked by WJLA’s Jeff Goldberg whether a police shooting — like the Aug. 9 shooting death of Michael Brown in Ferguson, Mo. — could happen and spark unrest here. Yes, he said candidly, but Arlington County Police has been doing its best to ensure it does not.

For one, said Commonwealth’s Attorney Theo Stamos, Arlington officers are well-trained in the proper use of force.

“The level of professionalism, training… and the degree to which Arlington police exercise restraint in terms of the use of force,” make a controversial police shooting very unlikely, she said.

However unlikely, though, Scott said the department was prepared for a Ferguson-like shooting, in which the suspect turns out to be unarmed and conflicting witness statements are given. ACPD would stay in close contact with the local community in the wake of the shooting, would release information in a timely manner and would thoroughly investigate the shooting, he said.

Scott said the Ferguson police department seemed to be “trying to hold something back” after the shooting. “I think that those kind of things fueled the mistrust.” 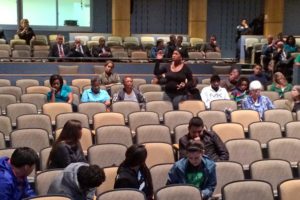 Despite the police department’s efforts to build trust with minority communities — like Nauck, Arlington’s oldest African American neighborhood — speakers at the forum expressed concern about policing in the community. Some accused specific officers of being too aggressive, while others said that officers don’t spend enough time trying to be a part of the community.

“We should not be prisoners in our own house. Were were born and raised here,” said one Nauck resident, who said she was concerned about police “harassing” her sons. “You don’t go to my church. You only come out what, during Community Day? How are we supposed to trust you?”

“The way they speak to us is unacceptable,” said another woman. “The way they treat us in Nauck is not right.”

One young woman said she gets pulled over by ACPD at least once a week because she’s mistaken for her boyfriend, the co-signer on the car, whose drivers license is suspended. Another speaker said Nauck residents get stopped for riding bikes without helmets.

“Yet you put bikes without helmets in here,” he said, referring to Capital Bikeshare stations.

After the forum, Chief Scott said it’s clear that ACPD has more work to do.

“I thought I had a pretty good pulse on some of the issues that are out there in the community,” he told ARLnow.com. “I heard some things tonight that really have made me pause and think we have work to do in some of these communities in terms of trust in the police department.”

END_OF_DOCUMENT_TOKEN_TO_BE_REPLACED

More Stories
Gillespie: ‘We Have to Get our Numbers Up’ in ArlingtonSchool Board Members Not in Favor of Wilson School Site