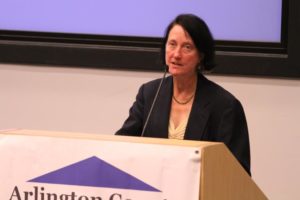 This month, we asked the candidates from each competitive race on the Nov. 4 ballot to write a sub-750 word essay describing why Arlington residents should vote for them.

But Arlington Public Schools (APS) will not be able to meet the challenge under its recently adopted capital budget, as it projects a 2,500 seat deficit even AFTER spending hundreds of millions of dollars to produce 4,000 additional seats.

To address the crisis, School Board ought to ask the Superintendent some hard questions:

Since eighty percent of the schools’ half-billion-dollar operating budget is funded by local taxes and nearly half of every local tax dollar you pay goes to it, Arlington County Board should ask some hard questions too.

County Board member Mary Hynes cast these concerns aside at a recent County Board meeting, saying: “I caution about doing the straight math.” She pointed out that there’s a lot more to a school upgrade than new classrooms, and the high per pupil cost reflects community values. In other words, the School Board must continue business as usual because that’s what the community wants.

The problem with business as usual is that the County can no longer afford it. According to a recent Washington Post article, Arlington’s “office market has been in near free fall recently. Between 22 and 23 percent of all the office space in Arlington County — more than 8 million square feet — is vacant. That is nearly triple the rate in 2010.”

Under these circumstances Arlington should elect an independent to School Board who will stretch our tax dollars.

As a 10-year Westover resident and long-time community activist, I routinely urge the County Board to invest in basic services like libraries and schools over wasteful capital projects. With a Ph.D. degree in Political Science and classroom experience as a college instructor, I also strongly support APS’s focus on academic excellence.

Having served the U.S. House subcommittee for congressional oversight of special education programs, I am a strong advocate of remedial education.

If elected, I will work with my School Board colleagues to streamline the budget and guarantee success for all Arlington students. I will also encourage input from the public before key decisions are made. Visit my web site at www.AudreyClement.org and vote CLEMENT on November 4.

END_OF_DOCUMENT_TOKEN_TO_BE_REPLACED

More Stories
La Cote D’Or Cafe Reopens After Break-InBarbara Kanninen: Why You Should Vote for Me