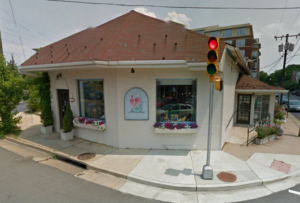 La Cote D’Or Cafe in East Falls Church (6876 Lee Highway) reopened last night, after having been closed for a day and a half due to damage from a break-in.

Cris Flores tells ARLnow.com that he was the manager on duty on Monday night. He said sometime after he closed up at 10:00 p.m. and before the first person came in on Tuesday at 7:30 a.m., vandals broke into the restaurant.

Flores said wine, liquor, beer and money were stolen from the establishment. The vandals also overturned tables, broke wine glasses and plates, removed food from the refrigerator and scattered it around, and broke wine bottles.

The restaurant closed on Tuesday for the police investigation and for clean-up. They remained closed during breakfast and lunch Wednesday to finish shampooing the carpet, but reopened in time for dinner. Flores estimates that the lost business from being closed, plus all the damage and theft, probably adds up to about a $10,000 loss for the restaurant.

“They did do a lot of damage in the place, it’s not that they just took the money,” said Flores. “But nobody was hurt. That’s the good part.”

Upon reopening for dinner on Wednesday, the restaurant posted a message to customers on its website:

Some of you may have heard about the incident that occurred after we closed on Monday, October 27th. Unfortunately, someone broke into La Cote D’Or and vandalized the establishment. We are happy to say that no one was hurt, and we are reopening tonight for dinner… We thank you very much for your continued support and patronage. We look forward to seeing you all again at your convenience.

The restaurant is open for regular business hours, starting today.

“We’re still trying to get the inventory back to normal, but we are back in business,” said Flores.

Police are investigating the break-in and have not yet named any suspects.

END_OF_DOCUMENT_TOKEN_TO_BE_REPLACED

More Stories
Morning NotesAudrey Clement: Why You Should Vote for Me