Many of us go through the annual struggle of figuring out a creative Halloween costume. For Clarendon resident and amputee Josh Sundquist, his disability presents him an annual showcase for his creativity.

Sundquist is dressing up as a foosball player — the tabletop soccer game — this year after being named to the U.S. Amputee Soccer team. His previous costumes include a lamp, a gingerbread man with a leg bitten off and a brilliant flamingo costume. 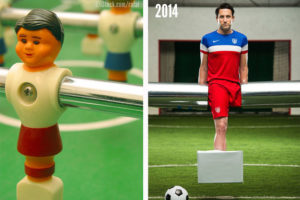 The above video is how Sundquist made this year’s costume. Sundquist is a 2006 Paralympian in downhill skiing and, according to his website, the only person in history named to both the Paralympian ski team and the amputee soccer team. He lost his leg after being diagnosed with bone cancer when he was 9 years old.

Sundquist is an also an author and motivational speaker, and his book, Just Don’t Fall is on sale now.