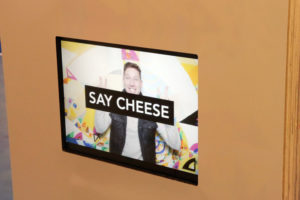 The combination of nostalgia and modern technology is at the heart of Crystal City startup Onomonomedia, which builds custom photo booths that link with social media.

Dave Clark founded the company four years ago after graduating from Liberty University — where he transferred from George Mason — and it has since grown into a multi-device based marketing agency, providing photo booths for companies to engage potential customers with “real-world experiences.”

The germ of the idea starting six or seven years ago, Clark told ARLnow.com last week, when Clark took a photo booth his friend bought to a wedding and it was a huge hit.

“I saw the opportunity in how social media was blowing up, but I wanted to make sure it included a real-world experience,” Clark said. “It’s really revolutionized event marketing. It’s a super engaging thing at an event, and gives people real content.”

Clark said it was hard at first to think of what the company could be, since photo booths are typically thought of as something to do ” at the beach or the mall.” But once he saw how people were using it, and how popular the feature of posting directly to social media from the booth was, he knew he had a potentially huge new platform. 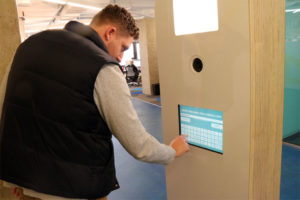 So, in 2010, he started to reach out to companies around D.C. to use his photo booths. He was able to bring booths to Adams Morgan Day and Foto DC and get noticed by D.C. events website Brightest Young Things. BYT became Time Magazine, whose partner, Wired, asked Onomonomedia to do a photo wall installation for its Wired Store, an annual gadget pop-up shop in New York City over the holidays.

Since then, Onomonomedia has only grown, built more and sleeker photo booths, different products — like Instagram kiosks, GIF generators, video booths and 3D booths. Clark said the GIF booth, which takes four photos of the user and turns it into an animation, is his most asked-for product.

“People wanted to see the content that was created at their event,” Clark said. “We’ll create it as classy, creatively and as easy as possible.”

The booths are made from dozens of pieces of plywood that are carefully placed together. There’s a digitial SLR camera, a computer and a printer in each. The original booths were designed by a full-time carpenter who moonlights as an artist. Now, Onomonomedia employs a full-time electrical engineer to help create new booths. 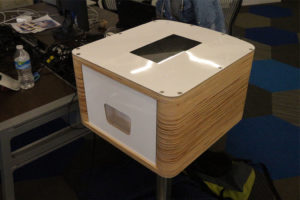 Each standard booth takes “about a week” to build, Clark said, and they have made about 30 so far. Ten of those booths were made at once for a huge project with Armani Exchange stores. The fashion company wanted Onomonomedia booths in 13 of its stores around the country simultaneously. The project “was like a $200,000 investment round” for the company, and was a “gamechanger” for its future.

This year, Clark expects Onomonomedia to exceed $1 million in sales for the first time. It works with Fortune 500 companies, has sold booths to Vitamin Water and is constantly exploring new avenues to pursue, Clark said. The company moved to Disruption Corporation‘s Crystal City office this summer, but not as a company that has taken investment. Instead, Disruption CEO Paul Singh just liked the idea and the company so he offered Clark and his seven full-time employees office space.

Now, Onomonomedia is in discussions with investors for the first fundraising the company has ever done. It’s been bootstrapped to this point, starting when Clark began renting booths to use for events. Now, the company is profitable, and hiring programmer and interface designers for its next steps, which Clark wasn’t quite ready to reveal.

“We’re not always first to market with some things,” Clark said, acknowledging that there are other companies also making social media photo booths. “So when we come out with something, it’s got to be the best one our client has ever seen. People will pay top dollar for this engagement. When we put something out, it’s got to be killer.”