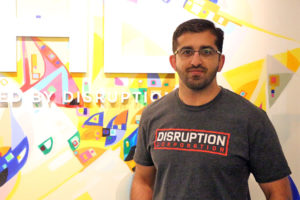 Paul Singh is filled with ideas.

Sit down for a while with the founder and CEO of Disruption Corporation, a venture capital firm that owns and operates Crystal Tech Fund, and it’s clear that the 33-year-old Singh is aching to break paradigms.

That’s part of what led him to Crystal City. Singh is a native of Great Falls and an alumnus of Bishop O’Connell High School, but he moved to California’s Silicon Valley in 2008, where he co-founded the 500 Startups angel investment firm. He moved back to Northern Virginia — he now lives in Ashburn — last year to start a family, and immediately “scoped out Crystal City, but kept it ultra-quiet.”

“We had Disruption up and running,” Singh said. “We thought, ‘what if we tried to build an ultra-productive environment for all kinds of creative entrepreneurs?’ We were thinking about where we can place it that would have a big impact. I realized I could do something meaningful here and build a model for a future American city.”

Crystal Tech Fund is both a coworking space and investment fund. Almost all of the companies that occupy desk space on the 10th floor of 2231 Crystal Drive have received an investment from Singh and his team. Some, like Bloompop, have office space there because, as Singh says, “I just like them.”

The Tech Fund isn’t a seed investment firm or a “traditional” venture capital firm, giving companies Series A, B or C investments in the tens, or hundreds, of millions of dollars. Instead, it aims to fill the funding gap between a company’s initial seed round (which is typically less than $1 million) and a Series A. Companies in the Crystal Tech Fund largely generate about $1 million or more in annual revenue, and have a team in place. 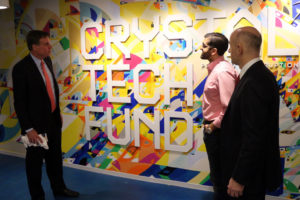 “I love to fill gaps,” Singh said. “There’s a lot of money available for the first round of funding. If you want to raise ultra-big money, there’s a lot there. But there is a gap between the seed and later-stage funding, so we fill the gap there.”

Recently, Singh has been fixated on another gap: the lack of firms qualified — and legally allowed — to give private investors research and advice for investing in startup companies. That’s why Disruption “handed in its exemption” and announced last week it has become a registered investment advisor.

Venture capital firms are generally exempted from regulations and disclosures the U.S. Securities and Exchange Commission requires of firms like Merrill Lynch and Charles Schwab because the firms don’t give advice to outside investors. Disruption no longer gets that exception, meaning, Singh said, he now has to be ready to be audited at any moment. He prints out his emails and even his tweets, just to be safe.

“There’s really nobody else doing what we do specifically,” Singh said. “We have a deep bench of analysts that provide research for us on companies we invest in. Now we’re able to provide whatever research these clients need.” 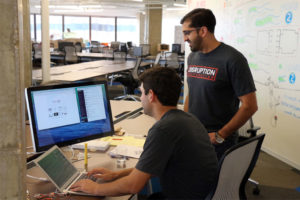 Crystal Tech Fund exists because of Disruption’s partnership with Vornado/Charles E. Smith, which owns the building and dozens of other properties in Crystal City and around Arlington. As part of the partnership, Crystal Tech Fund is leasing the entire, one-acre floor. Phase II of the Tech Fund, adding another 100 seats and opening up a total of 27,000 square feet, is expected to begin construction next month.

Disruption also leases apartments in a nearby building that it allows potential companies and investors to stay in while in the area. The partnership and innovation has led to pictures of Singh being displayed around the area as part of the Crystal City Business Improvement District’s new placemaking campaign. Below Singh’s picture, it reads “Spark Disruption.”

Singh has set out to disrupt his industry since he started investing in 2009. While many venture capitalists only do a few deals in a year, Singh invested in 75 different companies in 2010 alone.

“People thought ‘what the f-ck, that’s crazy,'” Singh said. “I’m not claiming to be right or smarter, but I learned the venture capital world is a little ironic, because we find and fund innovators, but we’ve operated the same way as an industry for 50 years.”

“I’ve only been an investor for four or five years,” he continued. “I don’t pretend to know anything, but I’ve done more deals in that time than most investors make in their lifetime… We wouldn’t have gotten here if we weren’t doing something right.”