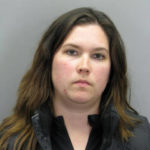 The Courthouse-based law firm of Bean Kinney & Korman has been rocked by a violent crime in McLean.

A married couple, Andrew and Alecia Schmuhl, are accused of stabbing a man and a woman in their McLean home, after knocking on their front door on Sunday. The victims, both 61 years old, suffered serious injuries, according to Fairfax County Police.

The law blog Above the Law reports that the victims were Bean Kinney managing partner Leo Fisher and his wife. Alecia Schmuhl (pictured) was a Bean Kinney attorney who was fired on Friday, a source told the site. Her profile on the firm’s website has since been taken down.

A representative of the firm has thus far not responded to a request for comment from ARLnow.com.

Update at 11/14/14 — The Washington Post has additional details about the crime, which was described as a “torture session” by a prosecutor.