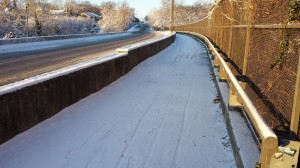 Starting this winter, Arlington County says it will be the first jurisdiction in the D.C. metro area to have a comprehensive policy of clearing some mixed-use trails during snowstorms.

The county announced today that it will start clearing 10 miles of trails at the same time as priority arterial roads. The Department of Parks and Recreation has cleared trails around the county before, but this will be the first time the highly-used trails will be plowed during and immediately after snowstorms.

The trails that will be cleared are:

The county does not own two of the most highly-used trails in Arlington — the W&OD Trail and the Mount Vernon Trail. The Northern Virginia Regional Park Authority owns the W&OD and the National Park Service owns the Mount Vernon Trail. For updates during snow storms on the status of those and other trails around the county, cyclists and walkers should refer to the BikeArlington forums, the county says.

According to WashCycle, a protected bike lane could be also coming to Wilson Blvd between Rosslyn and Courthouse. The bike advocacy blog says the cycle track is “in design and evaluation right now.”

DES received a $300,000 budget boost from the County Board this past spring, earmarked to allow trail plowing, according to the Washington Post. Cyclists represent about 1 percent of those who commute to or from work in Arlington County, survey data shows.

Arlington County has 92 drivers and 46 trucks among its snow-clearing resources. The drivers received computer-based simulator training to prepare for this winter season and potential safety hazards, the county said in a press release.

This winter, weather forecasters are predicting colder temperatures and more snow than normal.