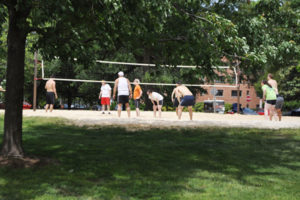 At least one Arlington resident thinks that should change. Mikael Manoukian, who says he’s an Arlington native, told the County Board on Saturday that the county has 26 lighted rectangular fields, 19 lighted diamond fields and dozens of lighted basketball and tennis courts.

“There are 11 sand volleyball courts and none are lighted,” Manoukian said. He advocated putting lights on the volleyball court at Quincy Park in Virginia Square, which is currently undergoing the design process for a renovation.

“Every other facility at Quincy Park — the basketball court, tennis court, soccer field, diamond field — has lights,” he said. “And there’s good tree coverage if light pollution is an issue. Perhaps money could be found outside the maintenance fund to do that later.”

County Department of Parks and Recreation spokeswoman Susan Kalish confirmed that there are no lighted sand volleyball courts owned the county. In fact, she said, sand volleyball lighting hasn’t even been formally proposed, as far as she’s aware.

“I’ve never heard about that before, that would be a new one,” she said. “So many of the other sports have user groups or things that, and volleyball doesn’t necessarily. There’s no one coming forward to say a lot about that.”

There is some good news for Arlington volleyball players, however. There are two privately owned, but publicly accessible, lighted sand volleyball courts at 2451 Crystal Drive in Crystal City.

Photo via Arlington Parks and Recreation