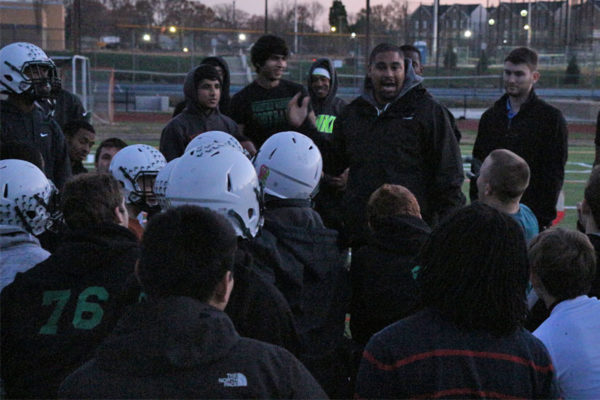 In what may be the final practice of the Wakefield High School football team’s greatest season ever, head coach Wayne Hogwood runs a drill for end-of-game situations that culminates in a 30-yard field goal. His team, joking on the sideline in between drills for the previous hour and a half, storms the field as if they just clinched a championship.

Players hoot and holler — one even jumps on Hogwood’s back — before settling down to hear their energetic young coach discuss meeting times before tonight’s game. One would never suspect that, in 26 hours, the Warriors (8-3) would kick off the school’s first second round playoff game against an 11-0 team from Tuscarora High School that has laid waste to nearly every opponent it has played so far.

This is the new reality for Wakefield football. Last week, the Warriors played their first ever home playoff game against Potomac Falls High School and won, 25-18, the first playoff win in school history. Just two years ago, the Warriors had gone 0-10 and played before crowds of dozens.

Last Friday, hundreds of students, alumni and South Arlington residents packed the stands to witness history. Hogwood, who graduated from Wakefield in 2000 and whose mother still lives across the street from the school, knew what the game meant to the community.

“They filled the stands in like 28-30 degree weather, so we’re really appreciative of the community,” Hogwood said. “All of my friends, people I graduated with, everybody was out here, people were supporting the program. People have really started to pick up and get on the bandwagon for Wakefield football … It’s a great feeling to get the win, but we’re not settled on that. We have another game this week.”

It was the culmination of two years of work for Hogwood to turn around his alma mater’s football team. Last year, he was focused on teaching the fundamentals of football while the team finished 3-7, a three-win improvement from the previous year. It wasn’t good enough to satisfy Hogwood, who left an assistant coaching job at Yorktown to take the reins here.

Hogwood started to realize his message of discipline and togetherness had sunk in during the last game of the 2013 season, when the Warriors, who had been 2-7, rallied to come together and beat Mount Vernon. The teamwork carried over to this year.

“This year we finally jelled as a unit and had each other’s back,” he said. “We would go to war for each other. Once I realized we had that coming back and we were able to get a couple of players come out, that really helped.” 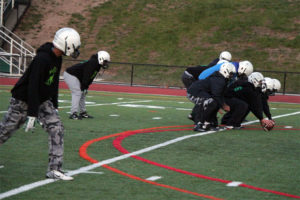 Junior running back Leon Young has rushed for more than 1,200 yards this year and scored 12 touchdowns. He said that while Hogwood has laid the groundwork for the team’s new mentality, the attitude shift had to come from the boys in pads lining up next to each other every day.

“It starts with the players themselves, and getting them to want to be here,” Young said. “It’s really about holding each other accountable for what you do. You’ve got to make sure you put forward the effort and believe in what you do.”

One of the first players to experience Hogwood’s new coaching style was junior lineman Anthony Tham. Last year, Tham had had behavioral problems at school and at home, and showed up for training camp two weeks late with no physical. Hogwood wouldn’t let him play.

Tham cried in his office, Hogwood said, and the new head coach leaned in and told him, “if you want to be on this football team, be the first one here next summer with your physical in hand.” This August, when Hogwood showed up on the first day of training camp, Tham was there, physical in hand.

Last Friday, Tham made the play that sealed the Warriors’ win, blocking a punt and returning it for a touchdown to put Wakefield up 13 points over the Panthers.

“When I got here, I was like ‘I’ve got to earn the spot and show out this year,’ because nobody knew who I was,” Tham said. “I wanted to make a name for myself.”

Tham’s name is already familiar in the community because his older brother, Dominique, is one of the best basketball players in the region. Another player hoping to make a name for himself was Riley Wilson, the senior quarterback who transferred to Wakefield last year in the hopes of starting and drawing attention from college teams. Mission accomplished: he said he’s already in discussions with several Division III colleges and a few smaller Division I (now the Football Championship Subdivision) schools.

“I took a pretty big risk coming here, coming to an 0-10 team, and I was thinking ‘what if nothing happens and we still end up going 0-10, 1-9?'” Wilson said. “So I couldn’t be any happier doing the opposite, becoming a successful football team.”

Not only are the Warriors an unmitigated success, but they’ve started to earn respect. Young said teachers and students he’s never met are encouraging him and thanking him in the hallways. Tham, who played for the Warriors as a freshman, said this year has been different when interacting with opponents, too. 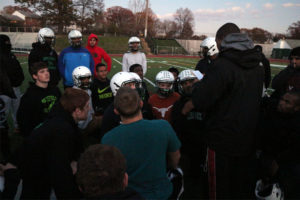 “I remember playing Mount Vernon and we were beating them pretty bad,” he said (the Warriors won that game, 45-12). “One of the lineman was saying something to my teammates, and my teammate George and I just pointed at the scoreboard. We didn’t get to do that last time I played. That felt great to say ‘oh yeah, but we’re winning.'”

Tonight’s game will be the hardest Wakefield has had all year. Tuscarora has a dominant running back in senior Noah Reimers, who has already rushed for more than 2,000 yards, and is many writers’ pick to win the Division 5A state championship. Wilson said the Warriors can win if Tuscarora comes out and doesn’t respect the program Hogwood has put together.

In the huddle after possibly the last practice of the best season in Wakefield football history, Hogwood told his team, gathered, kneeling before him, to be on time, be responsible before the game, and to stay together. Then he broke the huddle down, but not before giving them one final message.

END_OF_DOCUMENT_TOKEN_TO_BE_REPLACED

More Stories
Your Beermonger: What to Serve at the Thanksgiving TableGlebe Road Colombian Store Closes, to Reopen As Mexican Restaurant