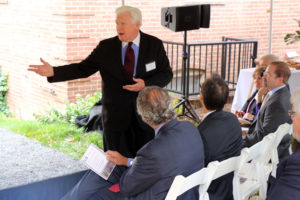 Moran is a former college athlete, having played football at Holy Cross, and said in a press release that the current system is broken, neither sufficiently protecting the student athletes nor effectively regulating the schools’ allotment of funding.

“We know our intercollegiate athletic system is broken. Scandal after scandal in the news continues to undermine our faith in the integrity of the intercollegiate athletic system,” Moran said in the release. “Despite piecemeal efforts at reform, we still see gaps that leave our student athletes vulnerable, whether through due process or appropriate health protections.”

Moran is proposing a “Presidential Commission on Intercollegiate Athletics Reform,” which would be a “blue ribbon commission” that includes members of Congress, college sports and education experts.

The commission would be charged with reforming the NCAA which has come under fire in recent years for its handling of scandal investigations at Penn State and the University of Miami. The NCAA was also successfully sued by a group of former athletes who said the organization profited from their names, images and likenesses while illegally preventing the athletes from doing the same.

You can read Moran’s full press release after the jump.

Congressman Jim Moran, Northern Virginia Democrat, Ranking Member on the Interior Appropriations Subcommittee and senior member of the Defense Appropriations Subcommittee, introduced legislation that would establish a Presidential Commission on Intercollegiate Athletics Reform. This blue ribbon commission of Members of Congress and sport and education experts would objectively identify and study concerns related to the intercollegiate athletic system and offer recommendations for reform.

“Recent scandals involving intercollegiate athletics programs at a number of the nation’s most prestigious institutions reveal the absence of policy and practice that would ensure a level of academic integrity, athlete welfare, and financial soundness appropriate for non-profit institutions of higher education,” said Rep. Moran. “We need to give our colleges and universities the tools they need to sustain healthy intercollegiate athletic programs that benefit the schools and protect our student athletes. The challenges of reform are so complex and important to higher education that a blue ribbon commission of experts and Members of Congress should be convened to objectively study these concerns and offer recommendations for reform.”

The highest paid public employee in forty states is the state university’s head football or basketball coach. The average financial loss among the Power 5 conferences was $2.3 million in 2013 and universities are pulling a larger percentage of institutional funds to cover the loss. Only twenty schools in the Football Bowl Subdivision have athletic departments with revenues exceeding expenses and these schools still graduate players at a rate twenty points below their male campus peers.

“As a former college athlete, I am deeply concerned about the welfare of our student athletes and the sustainability of our college sports programs. Despite piecemeal efforts at reform, we still see gaps that leave our student athletes vulnerable, whether through due process or appropriate health protections,” added Rep. Moran.