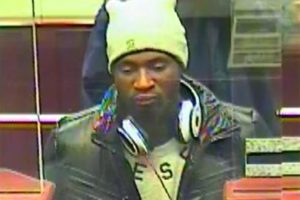 The Arlington County Police Department is investigating a weekend bank robbery in Ballston.

A man robbed the Capital One Bank inside Ballston Common Mall around noon on Saturday, police say. The suspect allegedly demanded cash and fled with an undisclosed amount of money.

The Arlington County Police Department’s Homicide/Robbery Unit, along with the FBI’s Washington Field Office, is seeking the public’s assistance in identifying a bank robbery suspect captured in surveillance footage.

On Saturday, December 6, 2014, at 12:08 p.m., an unknown male subject entered the Capital One Bank located inside the Ballston Common Mall at 4100 Wilson Boulevard in Arlington, Virginia and robbed the bank. After obtaining an undisclosed amount of money, the subject exited the bank onto the street.

The suspect is described as a black male in his mid-twenties to thirties and approximately 5’8″ tall with an average build. He was wearing a black puffy jacket, a sweatshirt underneath, a white knit cap and had head phones around his neck.

The FBI is offering a reward of up to $5,000 for information that leads to the identification, arrest and conviction of these bank robbers.