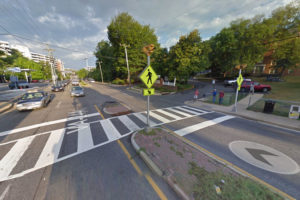 A group of residents and a nonprofit are petitioning the county, asking for a traffic signal to be installed at Columbia Pike and S. Frederick Street.

The Columbia Forest Civic Association, Virginians Organized for Interfaith Community Engagement (V.O.I.C.E.) and residents of the Carlyle House and Columbia Grove apartments have joined together to support the petition. They plan to be in attendance on Saturday morning to present the petition to the Arlington County Board.

A V.O.I.C.E. press release cites police data saying there have been 33 collisions at the intersection over the past five years, including four involving pedestrians and one involving a cyclist.

“A pedestrian-activated flashing yellow light was installed here several years ago but has proven inadequate as many drivers simply ignore it,” the press release states. “Many schoolchildren, seniors, and commuters need to cross here on foot every morning and afternoon. Cars pass through the intersection from 9 lanes and abutting driveways, and drivers attempting left turns are forced to protrude into the lanes. Even for careful drivers it is impossible to navigate safely.”

The petition has 219 signatures from residents of the neighborhood, and the petition says the traffic light now has the support of the county’s transportation staff and the intersection meets state traffic standards for a signal.

“All that remains is for the County Board to agree to expedite the release of the funding necessary — estimated at roughly $400,000 — to have the light installed,” according to the release.