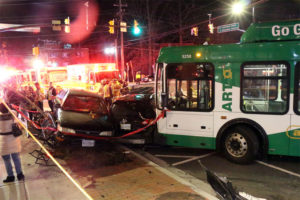 Despite some reader sentiment that Arlington Transit’s ART buses drive dangerously, incident records from Arlington and WMATA appear to debunk any claim that ART bus drivers crash at a significantly higher rate than other urban bus drivers.

According to crash statistics provided by Arlington’s Department of Environmental Services, ART buses have had 26 “preventable accidents” this year, a rate of 2.23 accidents per 100,000 miles of revenue service. This number accounts for minor scrapes, including incidents in the ART bus depot.

ART bus drivers came under renewed scrutiny last week when one was charged with reckless driving after causing a seven-car crash on Columbia Pike last week, sending four people to the hospital with non-life-threatening injuries. That driver, 26-year-old Agere Sileshi, had been driving in “revenue service” for four weeks, and is “currently on administrative leave,” according to DES spokesman Eric Balliet.

Sileshi is an employee of contractor National Express Transit, which declined comment through a spokesperson on Sileshi’s employment status and ART bus’ driving records. Sileshi was driving in the Columbia Pike Plaza parking lot and the bus was out of service when the crash occurred. Balliet said “no ART route goes into that parking lot.”

Balliet said the average crash rate for buses in “an urban environment” is between 1.0 and 2.0, but many jurisdictions do not tally the minor incidents Arlington does. WMATA also counts those incidents, and, according to spokesman Dan Stessel, Metrobus’ rate in 2013 was 2.16 per 100,000 miles — just under ART’s 2.23 accident rate.

“You can rack up a lot of ‘collisions’ during the overnight hours as hundreds of buses are moved around tight spaces in bus depots for service, cleaning and refueling,” Stessel noted.

Balliet pointed out that ART has received high safety marks in recent years, including an American Public Transportation Association’s Gold Safety Award in 2011, an award for the service’s pedestrian safety training in 2012 and had a 90 percent satisfaction rate in a 2013 ridership survey. Baillet also says every ART bus driver must go through 120 hours of operator training.

Despite the statistical evidence, some around Arlington have said it’s only a matter of time before an ART bus causes more serious injuries. Serkan Altan, a Columbia Pike resident, has been contacting Arlington transit officials complaining about their drivers’ behavior.

“ART bus drivers are driving crazy in my area, especially around Dinwiddie Street,” Altan wrote in an email. “ART supervisors… were made aware of the safety issues with its [reckless] drivers, especially in that area where I live. They should be held liable.”