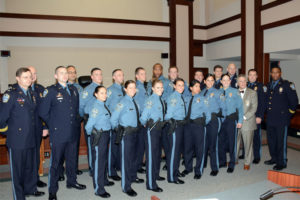 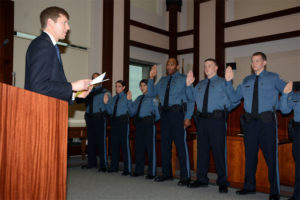 Of the 14 candidates who started in police academy, 13 will now begin training to become full-time ACPD officers, along with five sheriff’s deputies who also graduated from the academy. The officers were sworn in by Arlington Clerk of the Circuit Court Paul Ferguson on Friday, according to ACPD spokesman Lt. Kip Malcolm.

An Arlington officer also was given the Thomas L. Shaw Award for displaying “characteristics of professionalism, dedication and leadership,” according to the ACPD’s Facebook page.

The newly sworn-in officers “will complete several weeks of in-house training before beginning their ‘field training,’ which is an 12 additional weeks of training on all three patrol shifts with a training officer,” Malcolm said.