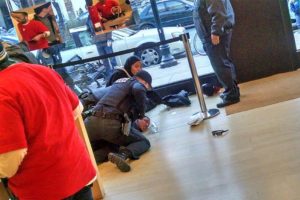 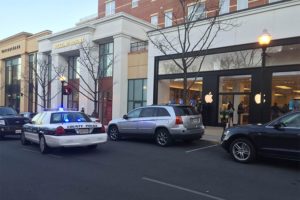 (Updated at 10:50 a.m.) Police tackled and arrested a theft suspect inside the Clarendon Apple Store on Tuesday.

The incident happened around 4:15 p.m., at the store at 2700 Clarendon Blvd. We’re told that the suspect tried to use stolen credit cards at the store, then tried to flee when police arrived. He was tackled and taken into custody.

As police confronted the suspect, one officer erroneously radioed that he had a gun. That prompted a large police response to the scene, but ultimately no gun was found.

“While officers were attempting to arrest the suspect, he resisted arrest violently and during the struggle, one of the officer’s ammunition magazines became dislodged from its carrier,” Arlington County Police Department spokesman Lt. Kip Malcolm told ARLnow.com. “The officer, who was still struggling with the suspect, saw the magazine and believed it to be from the suspect so he requested additional backup. After the suspect was taken into custody, they were able to quickly determine that the suspect was not armed.”

Just two hours later, three more suspects were arrested at the Apple Store for “attempting to obtain iPhones through false pretenses,” Malcolm said in an email.

“As the iPhone is viewed by many to be a valuable commodity, there are many attempts to fraudulently obtain or steal them from Apple Stores in the region,” he said. “Because there are a high concentration of Apple Stores in our region, suspects will often travel to the D.C. metropolitan area to perpetrate these crimes.”