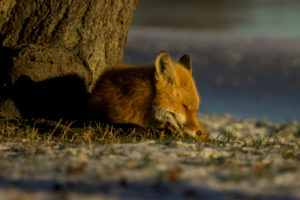 It may be frigid outside, but those willing to brave the cold may be able to spot one of Arlington’s more elusive mammalian inhabitants — local wildlife watchers have some of their best chances to spot a red or gray fox in the winter time.

Foxes were a recent topic of discussion in an Arlington neighborhood email list.

“Although foxes are primarily nocturnal, it’s not unusual to see one out hunting during the day in winter,” wrote Long Branch Nature Center Natural Resources Specialist Cliff Fairweather. “Nonetheless, foxes are elusive and seeing one is an uncommon treat.”

Red foxes are all over Arlington but hard to spot, according to another county naturalist, Alonso Abugattas. They are not native to the county, but they have since “naturalized.”

“The bottom line though is that we do not know exactly how many red foxes we have in Arlington, though they are very plentiful and inhabit almost every one of our neighborhoods,” he told ARLnow.com.

Gray foxes are native to Arlington, but much less prevalent and stick mainly to the areas around the Potomac, Abugattas said.

So how does one know if a fox is in their midst if there’s no red or gray bushy tail in sight? Fairweather says foxes tend to leave their “scat,” or feces, in “obvious” places to mark their territory, and their urine can smell like a skunk. Their scat “is usually dark and often twisted to a point at the ends and the contents reflect seasonal variation in fox diets. In winter, it is usually composed of hair from small mammals,” according to Fairweather.

Although foxes are peaceful animals and tend to be afraid of humans, they are omnivores and talented scavengers, according to Abugattas.

“They get to know the trash days and routes and stake out restaurants for the leftovers, unsecured trash, and rodents they attract,” he said.

If you do spot a fox and it approaches you or “acts unusually tame” — as opposed to running away — it might be a sign of rabies and should be avoided, Fairweather cautioned.