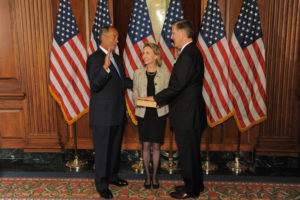 Rep. Don Beyer, the 8th District of Virginia’s first new congressman since Jim Moran in 1991, will serve on the committee in charge of environment policy.

Beyer is one of the newest representatives of the 47-member House Committee on Natural Resources, chaired by Rep. Rob Bishop (R-Utah). During his campaign last year, Beyer made the environment a chief platform, and he told ARLnow.com this afternoon that he asked to be placed on the natural resources committee.

“This is a great platform for continuing the discussion on climate change,” Beyer said. “Every day we seem to discover some new climate change fact that should inform the legislation we pass.”

Beyer campaigned on instituting a carbon tax, which will be introduced soon by Rep. Chris Van Hollen (D-Md.). Beyer said he will be “an early co-sponsor” of the legislation, which is likely doomed to fail in the firmly Republican-controlled House of Representatives.

“I have no illusions, I’m a freshman in the minority,” Beyer said about his ability to get his pet legislation passed. “I think there will be some playing defense, but there will be some things we can do together too. Trying to continue to surface basic scientific facts, basic data observation points about what’s happening in the climate worldwide. They don’t have to have a significant label on anything, but they’ll hopefully lead all of us to good decisions.”

The ranking member of the 21 Democrats on the natural resources committee is Rep. Raul Grijalva (D-Ariz.), who said in a press release he’s “tremendously pleased to welcome” Beyer to the committee.

“Rep. Beyer joins our committee as a welcome and established voice for conservation who understands the importance of protecting our natural resources and public lands, including the Chesapeake Bay,” Grijalva said. “Environmental allies like Clean Water Action support him because of his commitment to address climate change, promote renewable energy and stand up to Republican deregulation schemes. Those priorities are exactly what we need more of in this Congress, and I can’t wait to get started with him on our team.”

“The science, space and technology committee would be great because the National Science Foundation is moving to Alexandria and DARPA is in Arlington,” he said. “Oversight and government reform would be perfect because it has so much impact on the federal government.”

Beyer said he’s been texting Moran for advice — “Jim’s a dear friend,” he said — and hired five of Moran’s former staffers for his office in Capitol Hill, and two more for his district office. After less than two weeks in office, he’s already “been on the losing side of a lot of votes” and frustrated with the majority party’s actions so far.

“I hope the rest of the session isn’t like the first two weeks,” he said. “It seems to have been largely political symbolism, where the Republican majority has put bills up for passage confident they’ll pass, but probably with little confidence they’ll get through the Senate or the president will sign them.”