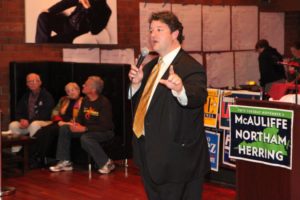 The decision allowed children of undocumented immigrant who are legal residents because of the Obama administration’s Deferred Action for Childhood Arrivals (DACA) program to receive in-state tuition if they meet other state residency requirements.

In this legislative session, there are bills in the House of Delegates and the state Senate that aim to undo Herring’s action. Lopez had previously introduced bills every year to do what Herring did in one fell swoop; now, he’s moving to block the new bills.

“We knew we’d have to defend against Tea Party attacks,” Lopez told ARLnow.com yesterday. “We assumed it would come. We hoped it wouldn’t, but now it has.”

The bills are HB1356, introduced by Loudoun County’s Del. David Ramadan (R), and SB722, introduced by Sen. Richard Black (R), also from Loudoun. Ramadan is himself an immigrant: he was born in Beirut, Lebanon, before immigrating to the United States.

Both bills declare that DACA-protected immigrants “do not have the capacity to remain in Virginia indefinitely,” and therefore are ineligible for in-state tuition. The bill applies to DACA children, those with temporary protected status — political refugees from foreign countries — and Deferred Action for Parental Accountability.

“To think that Sen. Black would want to take the refugees of civil wars and deny them an opportunity of education… that is a huge step backwards.,” Sen. Adam Ebbin (D) told ARLnow.com.

Republicans control both houses in the General Assembly, and with a 67-32-1 advantage in the House of Delegates, so Lopez knows he faces a steep climb in trying to beat the bills.

“We’ve talked to the attorney general’s office, we’ve talked to the governor’s office,” Lopez said. “We also are organizing through education and religious groups, getting them to lobby in opposition against these bills. There are many groups around the state making calls who are saying this is the wrong attack to take, not only from a fairness and a moral issue to take, but also an economic development and job growth [perspective].”

“I think we’ll either be successful and able to defeat these bills in subcommittee or there will be a heck of a fight on the floor of the Senate and the House,” Lopez continued. “Even if by some miracle these bills pass, I don’t believe the governor will sign them into law. I think he’ll veto, but I don’t know.”

Lopez said the issue impacts “my family, my friends and my neighbors,” and highlights the importance of providing in-state tuition for the state’s economic growth. Arlington residents will directly be affected, like Dayana Torres, a student at George Mason University in Fairfax who commutes to school from Arlington.

“I see being able to pay the in-state tuition rate as an essential benefit for my education that my parents and I have paid into through taxes,” Torres said in an email to ARLnow.com. She is the president of the Mason Dreamers and co-founder and former president of Dreamers of Virginia. “I affiliate with the Republican party in many key political topics, so it is always difficult for me to see Republicans in office actively trying to reverse decisions that benefit my family and I since we have been paying taxes and desperately need the in-state-tuition rates.”

Falls Church resident Giancarla Rojas is attending Radford University after spending two years at Northern Virginia Community College, and her tuition would be put in jeopardy if the new bills pass.

“At the time the Attorney General Herring announced his decision, I was in my last semester at Northern Virginia Community College. I was certain that I was not going to attend a four year university; I could not afford the out-of-state tuition,” she said. “After his announcement, not only did I attend a four-year university, but I obtained enough financial aid to finish my Bachelor’s in two years. If Republicans reverse the Attorney General’s decision, I will not be able to obtain my Bachelor’s Degree.”