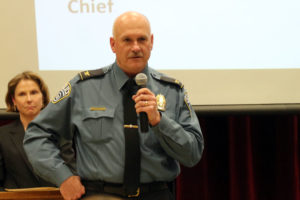 Arlington is planning to begin a “national recruitment” for its next police chief. Scott will officially retire on March 20.

Colleagues – It seems that all good things must come to an end. Doug Scott is retiring from Arlington County after serving as our outstanding Police Chief for 12 years.

Doug is retiring after a 40-year career in law enforcement. He has done an excellent job of serving our community and our organization – not only as our police chief, but also as a stalwart member of my Executive Leadership Team. Doug is always thoughtful, measured, and focused on the bigger strategic picture. He is results-oriented and focused on solutions and I very much value his contributions to the big questions we wrestle with. He is a tremendous supporter of his officers and staff.

Doug will be with us until March 20. Over the next couple of months, I will name an Acting Police Chief and begin a national recruitment.

We will miss Doug and his wise counsel. I am grateful to Doug for his service to our community and our organization. I know you will all join me in wishing Doug all the best as he and his family enter this new chapter in their lives.

Chief Scott holds an associate’s degree in police science, a bachelor’s degree in applied behavioral science and a master’s degree in public administration from George Mason University. He is also a graduate of the FBI’s National Academy and National Executive Institute as well as the Executive Leaders Program at the Center for Homeland Defense & Security. From 2009-2010, Chief Scott served as the president of the Virginia Association of Chiefs of Police (VACP). Currently, Chief Scott serves as an Executive Board Member for the International Association of Chiefs of Police (IACP), after having served for many years on its Highway Safety, Environmental Crimes, Terrorism and Resolutions Committees.

Read more →
More Stories
Rental Report: When You Have No Time to Find an ApartmentVictim of Early Morning House Fire Dies