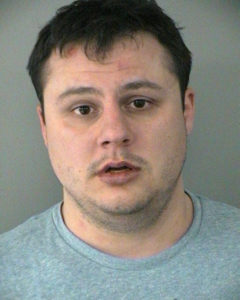 A drunk Arlington resident tried to kiss the driver of his Uber ride then stole her phone when his unwanted advances were rebuffed, according to Arlington County police.

The incident happened just after 6:00 p.m. Saturday evening, on the 2200 block of S. Garfield Street in Nauck. Police say 31-year-old Richard Hilliard, who was intoxicated, became belligerent after trying to kiss the Uber driver.

“When she resisted the subject assaulted her and prevented her from calling police,” according to a crime report. “The subject stole her phone and left it on the front steps of his residence.”

The woman’s phone was “recovered by a witness.” Police arrested Hilliard at his home shortly thereafter. While being hauled off to jail he allegedly tried to kick out the rear window of the police cruiser.

Hilliard has been charged with robbery, preventing a 911 call and attempted destruction of property. He was held without bond.

Update at 11:15 a.m. — An Uber spokeswoman has issued the following statement about the incident to ARLnow.com:

“This is an appalling and serious crime. We are in contact with our valued driver partner and will continue to provide support. Upon learning of the incident we immediately and permanently removed the rider from our platform, and stand ready to assist authorities.”

Numerous Arlington County police officers, firefighters and medics are on scene at the Pentagon after a shooting at the Metrobus platform, outside the Pentagon Metro station.

Four years ago today, one of the strangest stories in Arlington history played out. It was a slow Thursday in August when an ARLnow editor was on the phone while…

A resident was seriously hurt after trying to confront a thief in his backyard. The incident happened around 3:30 p.m. Friday on the 6200 block of Washington Blvd, in the Highland…

Pupatella Gets Millions for Expansion — “Arlington’s own Pupatella pizza restaurant chain has raised $7.5 million to continue its growth spurt, with plans to open more more than a dozen restaurants…