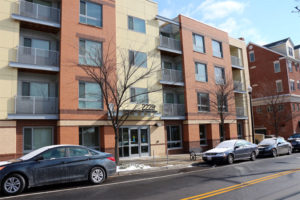 (Updated at 2:20 p.m.) A burglar made off with 200 pounds of meat between Friday night and Saturday morning, just before the Arlington Food Assistance Center was set to give out its weekly meals to families in Nauck.

AFAC dropped off its usual delivery on Friday night at at 2229 Shirlington Road, at the Bonder and Amanda Johnson Community Development Corporation, to be distributed to families on Saturday, AFAC Executive Director Charles Meng told ARLnow.com. At some point overnight, according to Meng and police reports, a burglar entered the building and stole about 200 pounds of meat. There is no suspect description.

“Chicken, fish, hot dogs and dried beans were stolen,” Meng said this morning. “We quickly replaced that so that the distribution could go on the next morning. It’s unfortunate, but it’s more of a case where somebody saw an opportunity and saw some food and took it. I suspect it was someone who was more in need of food than anything else.”

Meng said the food was being held in an office with computers and other electronic equipment, none of which was stolen. Considering AFAC delivers more than 80,000 pounds of food a week, Meng did not seem concerned with the theft.

“Two hundred pounds is going to cost us $200 or so,” Meng said. “We have the backup supplies to replace it. In our mind, the thing we want to do is make sure our clients get served. That’s our first objective. We deal with other matters after that.”

AFAC’s objective continues to be strained as the group struggles to meet the ever-increasing demand of Arlington’s hungry families. Meng said AFAC served a record 2,230 families last month and he’s projecting AFAC will exceed its food budget by $150,000 for the second straight year.

AFAC is serving 100 new families each month, Meng said, and he doesn’t anticipated the trend reversing itself anytime soon.

“We put in a request to the county for additional funding,” he said. “Right now their funding amounts to 6.8 percent of what it takes to operate AFAC. They’re getting a fantastic deal, they’re getting an 1,100 percent return on their dollar in one year. I hope they understand to keep this organization running and helping this community, some additional support is needed.”

END_OF_DOCUMENT_TOKEN_TO_BE_REPLACED

More Stories
Looking Back at the Top Stories of 2010 (Part 3)Ask Adam: Defining an Arlington Bedroom