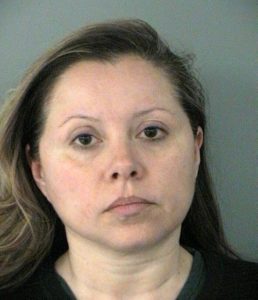 The Arlington County Police Department has arrested a 39-year-old Fairfax woman for allegedly running over a man in a Columbia Pike parking lot yesterday evening.

Alexandra Mendez was arrested at her home at 6:00 this morning, police have announced. She is charged with aggravated malicious wounding, malicious wounding, two counts of hit-and-run and driving on a suspended license. The 40-year-old victim, a Stafford resident, remains at George Washington University Hospital with life-threatening injuries, police said.

The man was lying on the ground when police and witnesses say Mendez drove her SUV over him, dragging him several feet before speeding off westbound on Columbia Pike. Mendez also allegedly rolled over another man’s foot in her Toyota Highlander, in the parking lot behind a car dealership and beauty salon on the 3600 block of Columbia Pike.

Mendez is being held at the Arlington County jail without bond. Police also recovered the SUV when making the arrest this morning.

The Arlington County Police Department has taken into custody and charged Alexandra Mendez, 39, of Fairfax, VA, following yesterday evening’s accident in the 3600 block of Columbia Pike. Mendez was denied bond and is currently being held in the Arlington County Detention Facility. She has been charged with aggravated malicious wounding, malicious wounding, two counts of hit & run and driving on a suspended license.

On January 27, 2015, at approximately 4:44 p.m., the suspect struck a male victim with her vehicle in a parking lot, knocking him to the ground. Numerous witnesses attempted to prevent her from driving away from the scene as the victim lay on the ground in front of her Toyota Highlander. After ignoring their requests to stop, Mendez proceeded forward over top of the victim and fled the scene. She remained at large until officers took her into custody at her residence at 6:00 a.m. this morning.

Emergency personnel transported the victim, a 40 year-old Stafford, VA man, to GW Hospital with life-threatening injuries, where he remains in critical condition.