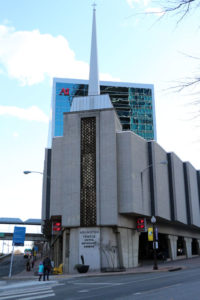 (Updated at 4:35 p.m.) A pastor’s cell phone was stolen while he was trying to stop a theft inside his church this past Sunday.

The incident happened around 5:00 p.m. on January 25 at the Arlington Temple Methodist church in Rosslyn, also known affectionately as “Our Lady of Sunoco” in reference to the gas station below it.

Police say a man was rummaging through the church’s kitchen and trying to steal items when the pastor confronted him. The pastor pulled out his cell phone to call 911, and that’s when the suspect snatched the phone and ran off, according to Arlington County Police spokesman Dustin Sternbeck.

The pastor did not recognize the suspect, who remains at large. From an ACPD crime report item:

ROBBERY, 150125037, 1800 block of N. Nash Street. At 4:59 pm on January 25, an unknown subject entered the Arlington Temple Methodist Community Center and was attempting to steal items from the kitchen. When confronted by a pastor, the subject stole the pastor’s phone and fled the scene. The suspect is described as a black male in his twenties, approximately 5’8″ tall and 175 lbs. He was wearing a striped khaki jacket, dark pants and a black ear warmer.