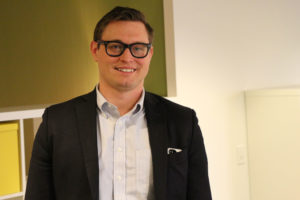 (Updated at 1:15 p.m.) OmniEarth COO and cofounder Jonathan Fentzke says his company likes to stay “under the radar,” an ironic phrase considering its plans to launch 18 satellites to generate data from around the world in a host of different sectors.

Officially launched in February 2014, OmniEarth takes geospatial data and provides analytics for a broad range of companies. This could mean telling municipal water suppliers which parcels are using too much water — crucial in drought-ridden areas like California — or telling oil and gas companies where there are faults along their pipelines.

“More than 80 percent of data these days has a location along with it,” Fentzke told ARLnow.com from his office above the Crystal City Shops this morning. “Remotely sensed data can give you an indication of how things are changing on a global scale.”

Fentzke and his cofounder, CEO Lars Dyrud, have been friends for more than a decade, but both were working in the applied physics laboratory at Johns Hopkins University when they realized their work for the public sector had use for private companies. Hosted payloads, when one entity rents extra space on a rocket being launched into space, were growing more and more common, and Fentzke and Dyrud wanted to bring it to market.

“We did three years of customer discovery, talked with more than 200 potential clients and saw that there really was traction for this business,” Fentzke said. “We sell information to people who know what to do with it, and we sell analytics to the people who don’t.”

OmniEarth’s main business model is selling applications of their data to its clients. That can be predictive models for the effects of the weather on a crop to multinational farm companies, where forests are being illegally cut down or even something Fentzke called a Twitter “happiness index,” which takes the mood of tweets and compares it with the location of people tweeting them, drawing maps based on the data.

OmniEarth is barely a year old and has already received about $3.5 million in funding, with partnerships with massive companies like Harris and Ball and local tech companies like Dynetics. They have partnered with Spaceflight to launch a constellation of 18 small satellites, monitoring “multi-spectral data,” with imaging outside of the visible spectrum (i.e. infrared light).

Fentzke, an aerospace engineer by training, says OmniEarth is “by scientists, for business users and decision-makers,” and the company is attempting to trademark the slogan “every day, everywhere.” The Board of Advisors reads like a who’s who of the cross-section of industries the company caters to, from a retired U.S. Air Force general to oil and gas executives to a former NASA administrator. 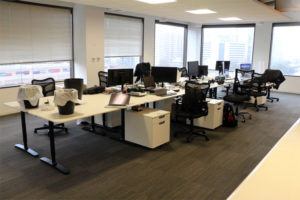 The company is growing faster than many other Arlington startups, but for what Fentzke and Dyrud have in mind, this is only the beginning. OmniEarth has already bought a smaller company called IRISmaps to leverage its geospatial data and continues to look to expand.

“This is not a get-rich quick scheme,” Fentzke said. “Our goal is to grow something that stands alone. We didn’t just blindly pick this business because satellites are cool. It’s a tool for data, and when you know how to leverage remotely sensed data, you have market-leading information, and it’s legal.”

In another year, the 20-person company expects to double in size and bring in “some big dollars” by the end of 2015. OmniEarth may still fly under the radar as a big-growth company in Arlington, but it won’t be a secret for long.

“The moment I think it’s valuable for us to wave our flag and say ‘hey look at us,'” Fentzke said, “we’ll do that.”