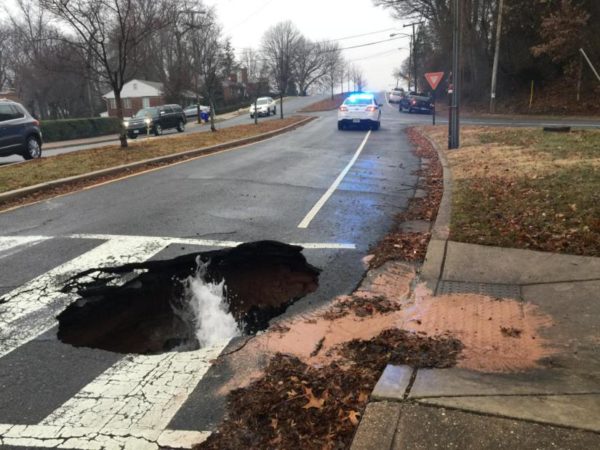 (Updated at 11:00 a.m.) A sizable sinkhole has formed on Williamsburg Blvd due to a water main break.

The sinkhole is located in a crosswalk, in a southbound lane of Williamsburg Blvd just off of Sycamore Street and the Williamsburg Circle.

A photo tweeted by Arlington County Police shows a small geyser of water inside a deep crater in the roadway.

“We usually recommend using a crosswalk…but maybe not this one at Williamsburg & Sycamore Street,” the police department said via Twitter.

Drivers should expect limited access to Williamsburg Blvd near the sinkhole and a lengthy repair process, according to Arlington County. A second possible sinkhole was also reported this morning, near road work at Washington Blvd and N. Ohio Street.