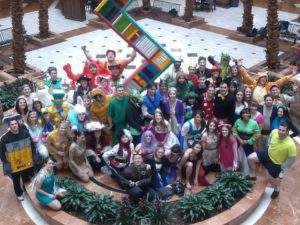 (Updated at 11:20 a.m.) A pub crawl planned for Sunday, Feb. 15, the day before Presidents Day, is about more than getting sloshed at a host of bars in Clarendon and Courthouse.

The Bow Wow Crawl for Charity is the seventh annual crawl on the February holiday for a group of friends. The themed crawls — previously there have been Disney and video game characters — always donate proceeds to charity and this year, the money is going to Arlington-based Homeward Trails Animal Rescue. Participants are encouraged to dress up like animals in the spirit of the event.

According to the bar crawl’s fundraising page, the bar crawl started seven years ago with three people on the day before a federal holiday. It has since grown to more than 100, benefiting charities like Give Kids the World and Child’s Play.

“Now this isn’t your typical bar crawl,” Adam Ross, who co-founded the bar crawl, writes on the page. “It’s not put on by a big promotion company. We are grassroots. We don’t sell wristbands or drink tickets or do any publicizing. It is the same crew that comes each year, only expanded by word of mouth, friends bringing other friends, or whatever strangers we run into along our journey. We aren’t out to make money off this, nor will we ever. After the second year of this bar crawl it was apparent that it was getting popular and that we would have a large number of attendees. We decided two things at that point; we would have a new theme ever year and we would raise money for a charity that corresponded with that theme.”

The crawl’s website has raised $400 of a $900 goal, with two weeks left on its online fundraiser.

The crawl begins on Sunday at 1:00 p.m. at Arlington Rooftop Bar and Grill (2424 Wilson Blvd). The crawl will then swing into D.C. before finishing up back in Arlington.

It’s unclear if the crawl has applied for or received a bar crawl permit, a new regulation the Arlington County Board instituted last summer. The permits are intended to recoup county costs from the additional police presence the crawls — which have been attended by as many as 5,000 people in the past — necessitate.