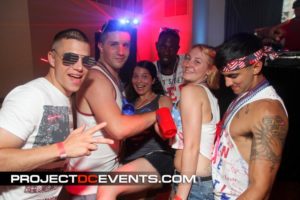 Bar crawls in Clarendon may be changing after the Arlington County Board approved new event regulations at its meeting on Saturday.

The new regulations will include fees charged to the organizers to recoup the cost of extra police and community resources required to deal with the nearly 5,000 people estimated to attend some of the crawls. The crawls, which have previously been organized without much input from the county, will now need to be approved in advance.

The specifics of how much organizers will have to be and the criteria under which pub crawls will be approved or rejected have not yet been determined. County Manager Barbara Donnellan said she plans to return to the County Board with the full, implemented policy before Halloween, which is expected to be the date of the next major pub crawl.

“We have, I believe, the highest percentage of 25-34 year olds as a percentage of our population than any community in the United States, and we embrace that group,” County Board Chair Jay Fisette said during the meeting. “We embrace their vitality and the energy they bring to our community as a creative class and workforce, and at the same time we request and require that they respect others.”

The approved regulation was seen as somewhat of a compromise between residents who want fewer and smaller crawls and the organizers who want to see the crawls continue on unabated. The Board first discussed amending its special events policy, last updated in 2012, in April during budget discussions. At the time, Donnellan requested $45,000 for police overtime specifically to manage the pub crawls. The Board directed Donnellan to return with an updated policy.

In the meantime, the crawls drew another round of controversy after an attendee in June allegedly stripped naked before leading police on a car chase that ended with a crash in Clarendon. That incident, paired with a women alleging stripping naked at the Arlington Magistrate’s Office during a March bar crawl, helped bring the issue to the Board’s attention.

“It’s two incidents out of thousands of people,” Project D.C. Events co-owner Alex Lopez told ARLnow.com earlier this month. Lopez pointed out that neither happened inside a bar. Project D.C. Events organized both the March and June pub crawls at which the incidents take place, as well as crawls in D.C. that have occurred without public incidents. “You don’t hear about bar crawls in D.C. because nothing happens at them. If you say, ‘oh everything was peaceful in the last bar crawl,’ well, no one is going to read that.”

According to a county press release, about 1,130 people responded to an online survey about how best to manage the pub crawls, but only one member of the public spoke during the comment period: frequent County Board critic Jim Hurysz.

The motion passed 5-0 and the Board generally lauded the police and staff for their work in bringing a “common sense” solution to the issue.

“It’s an evolution to figure out how to satisfy the various kinds of people who live in Clarendon,” Board Vice Chair Mary Hynes said. Hynes lives just a few blocks from the epicenter of the pub crawls in Clarendon. “People don’t want Clarendon’s reputation to be only what happened at that last pub crawl. Business owners want people to come to Clarendon and eat and enjoy all the amenities.”

“We’re going to do this and monitor and see what happens,” Hynes continued, “and if this doesn’t work, we’ll be back here… to see if we need to take any more steps or not.”