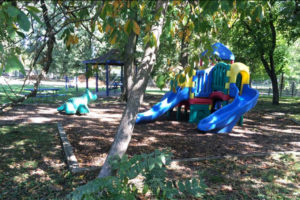 As part of the next installment of Neighborhood Conservation projects, five neighborhoods, including three along I-66, could be a getting a combined $2.6 million in infrastructure improvements.

Cherrydale’s Oak Grove Park, along N. Quincy Street, has been recommended for $795,000 worth of improvements, including a redone “tot lot,” construction of a playground for 5-12 year olds and replacing the existing gazebo with a larger picnic shelter.

Waycroft-Woodlawn is in line for $790,000 in pedestrian upgrades. The neighborhood has requested the money to fund curb ramp improvements for accessibility curb extensions at four intersections:

The other projects would each receive less than $500,000 in funding:

Five of the projects approved by the County Board in February are in the middle of their design phase and are on track for construction next year:

The sixth project approved in February, improvements to Woodstock Park in Waycroft-Woodlawn, still does not have a scheduled completion date.