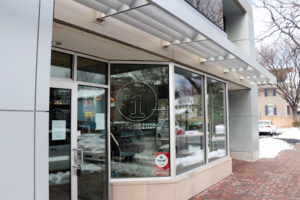 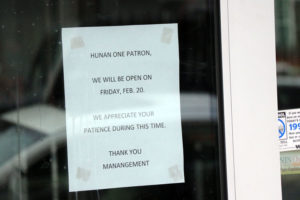 The Chinese restaurant that has become known around Clarendon for serving giant mugs of beer for cheap is closed for now.

Hunan Number One (3003 Wilson Blvd) has a sign on the door that says it will reopen on Friday, Feb. 20. The business has been closed since last week, it appears.

An employee who answered the phone Wednesday morning said the restaurant was closed “for a bit of remodeling” and confirmed that it’s expected to reopen Friday. When ARLnow.com stopped by this morning, workers were inside getting the business ready for the reopening.

The closure comes at an inconvenient time for those who might have wanted to toast the Chinese New Year, which is Thursday.

It’s unclear at this point what changes are being made to the interior.

Update at 12:05 p.m. — An earlier version of this story reported that Hunan One’s website automatically redirects to an online store that sells only Air Jordan sneakers. It appears that the problem has been fixed and the restaurant’s website is working properly again. Some users, however, may still be experiencing the redirection under certain circumstances due to browser caching.