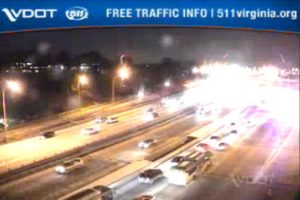 Police and firefighters are on the scene of a reported rollover accident on I-395.

The accident happened at the exit 8A ramp off of northbound I-395, near Pentagon City. Two travel lanes and the ramp are blocked approaching the scene.

Initial reports suggest that it’s a single-vehicle accident involving an overturned SUV. The driver was able to get out of the overturned vehicle on his or her own power, according to scanner traffic.

The driver’s injuries are said to be minor.