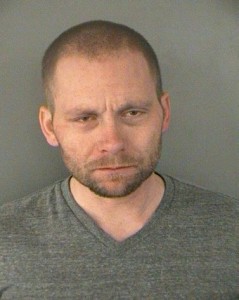 Benjamin Andruss, who pleaded guilty in October to hitting a pedestrian while drunkenly driving the wrong way on Wilson Blvd in Clarendon, has received a jail sentence.

Andruss will spend 9 months in jail, after Arlington Circuit Court Judge Daniel Fiore handed down a 5 year sentence, with all but the 9 months suspended.

Andruss was also ordered to pay restitution of $70,000, perform 100 hours of community service and spend 5 years on supervised probation — all while remaining sober and submitting to random testing.

During the sentencing, Assistant Commonwealth’s Attorney Josh Katcher said the case was not one of somebody having one too many drinks at dinner and getting pulled over. A friend had urged Andruss not to drive after he consumed 4-5 beers and three glasses of whiskey at a Ballston bar, but he ignored the friend’s pleas and proceeded to drive recklessly through crowded streets.

The pedestrian Andruss struck, meanwhile, suffered debilitating injuries as a result of the crash. 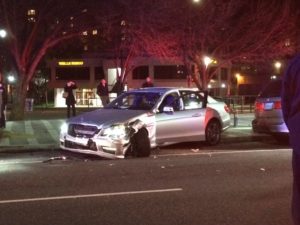 “Mr. Andruss… overindulged, was told not to drive, did so anyway, ended up driving the wrong way down Wilson Blvd, and caused [the victim] to suffer permanent impairment,” Katcher said. “After a period of incarceration, Mr. Andruss will start to put this behind him. [The victim] will never be able to do so.”

“Cases like this truly reveal how serious this community takes drunk driving,” Katcher told ARLnow.com. “The judge’s decision to depart from the sentencing guideline” — which called for only probation — “hopefully sends a strong signal to the community.”

Details about the crash, from our previous article:

The crash happened between 8:30 and 9:00 p.m. on Sunday, Jan. 12. Prosecutors say Andruss had just left First Down Sports Bar in Ballston, where he had consumed 4-5 beers and three glasses of whiskey while watching afternoon football games. A friend encouraged him to take a cab, but Andruss insisted on driving.

Andruss drove from the Ballston Common Mall parking garage to Clarendon, revving the engine of his Mercedes-Benz at stop lights and “speeding the whole way,” prosecutors said. At the intersection of Wilson, Clarendon and Washington Blvds, he again revved his engine at the stop light, then accelerated straight through the intersection when the light turned green.

Andruss sped the wrong way down Wilson Blvd, past Spider Kelly’s and other bars. His Mercedes ran up on the sidewalk, striking the side of the Clarendon War Memorial. In his path was a pedestrian, a man around 30 years old who works for the U.S. Department of Energy.

The pedestrian tried to dive out of the way, but Andruss struck a parked car, which then struck the pedestrian. The man regained consciousness in the middle of the street.