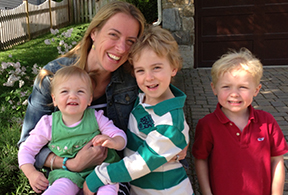 On the one-year anniversary of his wife’s death in a car accident in front of Nottingham Elementary School, Neal Lawson launched a foundation in her honor.

The Jennifer Bush-Lawson Foundation formally launched yesterday with a mission, according to a press release, of providing funding for “access to medical services, counseling and support for economically vulnerable mothers-to-be, newborn babies and postpartum mothers who don’t have the means or resources to start their journey on solid footing.”

Bush-Lawson was killed the morning of Feb. 24, 2014, while loading her daughter, Sadie, into a car seat on N. Little Falls Road. A passing dump truck hit the minivan’s door, which was sheared off the vehicle and into Beth-Lawson. She was pronounced dead at Inova Fairfax Hospital that afternoon.

Bush-Lawson was a 39-year-old mother of three children — two of whom attend Nottingham — and her husband decided to use her memory to put action behind one of her passions: helping other mothers.

“Jennifer was an amazing wife, mother and woman,” Neal Lawson, founder and CEO of the foundation, said in the release. “There is no better way to honor her memory than providing mothers-to-be the opportunity to be the best mother possible and providing newborn babies a healthy start at life.”

Bush-Lawson’s three children — Cooper, Booker and the youngest, Sadie — were all born premature, according to the JB-LF foundation’s website, and the care they received inspired Bush-Lawson to want the same for those less fortunate.

“Lawson dedicated her life to her children and to being the best mother possible,” the press release states. “She believed that every mother — regardless of race, color, creed, or economic status — should have an opportunity to do the same.”

The JB-LF has partnered with Virginia Hospital Center and the Arlington Pediatric Center to provide resources to pregnant women and new mothers. The foundation is also planning on hosting a silent auction and “celebrity chef dinner” in the spring, and a memorial 5K race in the fall.

The driver of the dump truck that struck Beth-Lawson’s car was charged with “failure to pay full time and attention,” a traffic infraction. The accident led neighbors to call for increased safety measures in the Williamsburg neighborhood.

According to WJLA, the community has added a speed and message board on N. Little Falls Road, the Arlington County Police Department has increased its presence in the area and the county has added “bike share lanes.” One community member told the TV station the road “does feel a little bit safer.”