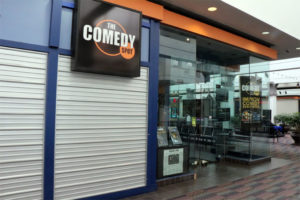 (Updated at 3:45 p.m.) The Comedy Spot, the stand-up and improvisational comedy venue on the third floor of Ballston Common Mall, will shut its doors this weekend and move into D.C.

Tomorrow night (Thursday), The Comedy Spot will host its final standup show, a free showcase for comics who have performed over the last 10 years at the venue.

Saturday night will be the final shows for the regular Comedysportz and The Blue Show improv comedy shows, at 7:30 and 10:00 p.m. respectively. Each show costs $15 and a large cast of present and past performers will take the stage for the final time.

After this weekend, the shows will move to the D.C. Improv at 1140 Connecticut Ave. NW, according to The Comedy Spot’s website. The first Comedysportz and Blue Show at the Improv will be March 14.

According to the host of the weekly open mic night, Kenneth Llewellyn, the Comedy Spot decided to let its lease run out, rather than renew before the mall undergoes its planned major renovation.

“The Comedy Spot is one of the longest running comedy mics in the DMV area,” Llewellyn said in an email. He’s hosted the free Thursday night shows, which have been held weekly for six years, since 2013. “After six years. the venue is closing so we’re having one last show featuring some of the all-time greats.”

The Comedy Spot’s owner, Liz Demery, told ARLnow.com in an email that her “rather expensive lease was up.”

“I adore the people and audiences at the DC Improv,” she wrote. “Instead of having to maintain a physical space, we get to show up and play at their excellent location.”