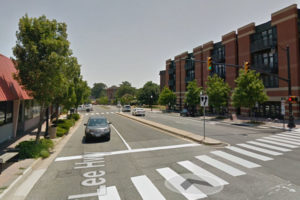 Residents of the Cherrydale neighborhood say there’s “no excuse” for the county to fall behind as much as it has with maintaining trees.

In a presentation to the Arlington County Board on Tuesday night, Cherrydale Citizens Association representative Maureen Ross went over several issues during her Neighborhood Conservation plan update, including the upkeep of the North Arlington neighborhood’s street trees.

“Our trees are a huge issue in Cherrydale,” R0ss said. “They’re not in good shape.”

Arlington is spending about $1.2 million on tree maintenance, removal and planting this fiscal year, according to county Landscape and Tree Supervisor Jamie Bartalon. Bartalon said the county has regular tree maintenance programs, but most of the funds are spent on safety-related pruning and removal of hazardous trees.

In county staff’s response to Cherrydale’s tree concerns, the Department of Parks and Recreation said it has recently established new practices for planting urban trees, but said funding is simply insufficient to accomplish all of Cherrydale’s requests.

“DPR’s baseline budget for tree planting is barely sufficient to replace the average number of trees that are removed each year,” the staff report reads. “DPR does not recommend reallocating tree planting funding towards tree maintenance when such reallocation may result in fewer trees being planted than removed from County property.”

Bartalon said the budget for tree planting in FY 2015 is $206,388, and the county has added a net total of 175 trees this year, based on an annual projection of 650 trees removed because they have died or were taken down for development. The majority of trees are removed because they are “dead, dying, hazardous or downed/damaged by storms.”

“Arlington loves its trees as do most residents so we always look for options before removing a tree,” Bartalon told ARLnow.com in an email. “If there is a safety issues… can it just be pruned? If it is diseased, can we cure it? Our last option is to remove a tree.” 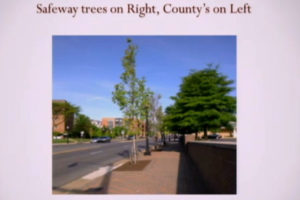 Ross and her neighbors contend that the county could avoid removing many of its trees if it simply kept a regular watering schedule. Ross showed examples of other trees, like the one pictured at right. She said the tree on the left in the image was planted by the Safeway 10 years ago.

“We planted our trees 20 years ago, but replaced them two or three times,” Ross said. “Why is Safeway able to do it and we can’t?”

There are more than 19,000 street trees in Arlington, according to DPR, and the county “cannot begin to cover the cost to implement a Countywide regular pruning cycle.”

When trees are damaged or hazardous, residents can report them to parks staff, which will respond. But Ross said she looks at Falls Church’s Willow Oak trees, planted 20 years ago at the same time of many of Cherrydale’s street trees, and wonders what could have been.

“[Those trees] look magnificent,” she said. “Why doesn’t Cherrydale look like that? No excuses.”