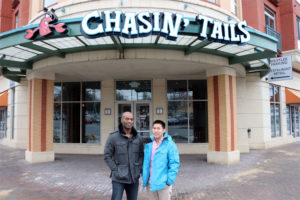 Ten months after first-time restaurateurs Au, Di and Hac Dang, Terrell Wilbourn and their three other partners opened Chasin’ Tails in Westlee, they weren’t sure they’d be in business much longer.

“We thought it was over,” Wilbourn admitted. He said he would have gone back in time and told himself, “Don’t open a restaurant. Just don’t do it.”

That was back in February 2013. A bumpy opening in April 2012 didn’t stop customers from coming in all summer, but once the winter rolled around, the Cajun seafood restaurant whose mantra is “No Plates. No Forks. No Rules.” started struggling to fill tables. Waiters were getting antsy because they would work six-hour shifts and make less than $30 in some cases. Things were looking bleak.

“That winter was brutal,” Au Dang said. “The honeymoon period was over. We weren’t getting the same amount of customers. We knew things weren’t going well.”

The ownership group didn’t do themselves many favors. When they opened, some menu items took more than an hour to be prepared. The veteran general manager the restaurant newcomers hired to help guide them was fired after two months because he didn’t fit. Dang remembers giving a customer a free lobster meal after it had come out late. The customer took to Yelp to blast him, saying he didn’t know what he was doing giving away free lobsters.

“We tried to do whatever we could to make customers happy,” Dang said. It didn’t matter; Chasin’ Tails was floundering. “We took responsibility. It was our fault. It’s our job to make the experience as good as possible.” 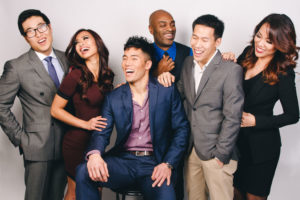 Then, spring hit. Any restaurant specializing in replicating Louisiana crawfish boils, complete with paper tablecloths, corn on the cob and seafood bibs is destined for a slower winter season. Customers started to come back. Prep times shrank from an unacceptable 45 minutes or more to a reliable 15-20 minutes.

Next month, Chasin’ Tails will celebrate its three-year anniversary. The business is doing well enough that the owners are launching three spin-off restaurants in Northern Virginia, including another Chasin’ Tails in Centreville.

“Everything’s painful at first,” Wilbourn said today, sitting down with ARLnow.com in the restaurant at 2200 N. Westmoreland Street. “Like riding a bike or overcoming a social anxiety. I know it’s a cliché, but it gets better.”

That’s not always the case in the restaurant business. Chasin’ Tails defied low expectations of its lifespan when it opened. Dang said he reads Yelp reviews every day and early on, they were “destroying us,” he said. “But it was all true.”

“Great food and very cool set up,” one Yelper wrote in May 2012. “Worst service I have had in years.”

“Overall, the food is good,” another reviewer wrote that month. “The downside is the service. Our server was very nice but he placed our order and then entered the witness relocation program.”

Fast-forward three years, and Chasin’ Tails has an average four-star rating, and most of the recent reviews are five stars. The restaurant, which opens only for dinner on weeknights and at noon on weekends, is so busy that a reservation is considered a must, unless one has at least a half hour to spare.

So how did the turnaround happen? How did Chasin’ Tails stay afloat? A combination of listening, learning and reading, we’re told.

The owners were in the restaurant all the time, pulling 80- or 90-hour weeks in the first year. They came face-to-face with many of the customer complaints. They heard the staff needed to be trained better, so they re-trained the staff and purged many of the initially hired servers.

They learned what some restaurant veterans might have known from the start — big orders mean bigger wait times, and preparation is key. A combination platter would slow the kitchen down so badly that the entire restaurant would suffer. Eventually, they had the “breakthrough” idea to cook food in batches, trimming prep time in half.

They read books on leadership, organizational management and even psychology. The owners started a Chasin’ Tails library and encouraged the staff to read along with them. It was a strategy borrowed from Di and Hac Dang’s previous careers as professional poker players. They rigorously studied books on the game until they were proficient enough to make a living on it.

They found that culture would breed success. They only hired people that they would get along with, and the staff is as close as can be.

“On their off days, sometimes our staff comes here to eat,” Dang said. “That makes us really proud because it shows they want to be here.”

“We’re goofy people and we like to have fun,” Dang said.

The parent company they’ve formed to connect the restaurant is named in the same vein: Happy Endings Hospitality.

Wilbourn said the playful name is also representative of the smile he likes to see customers sport as they leave the restaurant. Considering how the company started, he said, it’s hard to think of a more appropriate title.