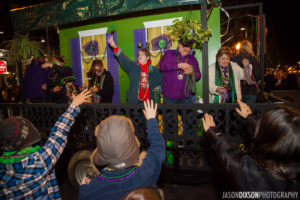 The Clarendon-Courthouse Mardi Gras Parade is still on tonight despite the rain and despite Mardi Gras having happened three weeks ago.

The parade is scheduled to start at 8:00 p.m. on N. Barton Street. About 30 floats and assorted groups are currently expected take part in the roughly half-hour-long event, which will run up Wilson Blvd to N. Irving Street.

Matt Hussmann, executive director of the Clarendon Alliance, which organizes the parade, said that he’d rather march in some rain than chance another parade-less year.

“It’s not raining hard,” he said. “What are the odds that if we postpone it again that it’s going to be any better?”

Hussmann said the parade has received a handful of cancellations from scheduled participants, including the beloved Ballou High School Marching Band. Still, Hussmann was optimistic for a good turnout and said the cancellations wouldn’t rain on his parade.

“It’s going to be a good crowd and we’re hoping as many people come out as [possible],” he said. “It should be fun.”