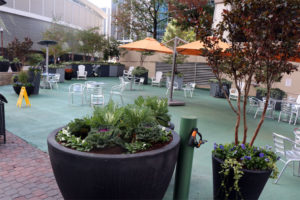 Rosslyn workers can enjoy a beer outside this afternoon in honor of St. Patrick’s Day.

Today from 4:00 to 8:00 p.m., the Rosslyn Business Improvement District is hosting its second ever pop-up beer garden, in the plaza at the corner of 19th Street and N. Moore Streets.

“In a busy urban area like Rosslyn with a large amount of pedestrians walking around, pop-up events like this do well since they maximize open space, grab attention and present something new and exciting,” Rosslyn BID President Mary-Claire Burick told ARLnow.com in an email. “With Plaza on 19th, an area that was previously just sidewalk, we now have a great space to regularly hold events like these.”

The beer will be a collection of Irish favorites like Guinness and Magners cider along with some craft beer selections, provided by the Washington Wine Academy. All of the beers will be $5.

The food will be served by the Urban Bumpkin BBQ truck, an Asian and barbecue fusion staple of the Rosslyn food truck lineup. Playing music during the whole event will be Rew Smith, a “pop/rock singer-songwriter” from Maryland.

Last year’s Oktoberfest beer garden — the first at the new plaza — drew more than 600 people, and event organizers are hoping the holiday and the warm weather will draw an even bigger crowd today. The BID will be passing out green koozies as a bonus for beer drinkers.