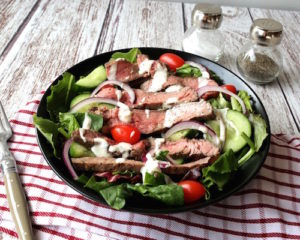 A new food delivery service is serving late night meals to some residents in the Rosslyn-Ballston corridor, Crystal City and Pentagon City.

Savory officially launched last Friday out of its base in D.C.’s Union Kitchen. Espinosa founded it after working as a nurse with shifts late at night.

“The first thing I get asked when I come into a shift is ‘what are we going to eat tonight?'” Espinosa said. The answer was “always Domino’s or Chinese food. The first two years I gained 20 pounds just because the food options were so horrible. So I decided to solve my own problem.”

Espinosa enlisted the former executive chef at Flight Wine Bar, Bradley Curtis, to prepare the meals. Espinosa aims for all of them to be under $10 and delivered within 30 minutes of ordering. That’s why, Espinosa said, the service days and locations are so sparse — he wants to make sure he can meet small demand before ramping up.

Those who don’t live in 22202 or 22201 but want Savory should request the service on its website, so Espinosa can gauge demand, he said.

“We go where the demand is,” he said. “If Arlington ends up being where most of our customers and we see huge growth, then we’ll expand there.”

This week, Savory will expand to the 22205 ZIP code, so it can serve Virginia Hospital Center. Espinosa said he expects hospital employees to be among his early adopters, since he’s acutely aware of their need for his service.

Tonight, Curtis is offering a D.C. half-smoke platter with baked beans, cole slaw and molasses brown bread or a mustard baked salmon with fingerling potatoes and peas, each for $9. Pre-orders can begin at 6:00 p.m. All orders have a delivery fee of $3 and the meals are delivered chilled with microwave or oven heating instructions.