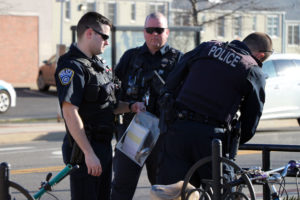 Arlington’s rate of Part I offenses (homicide, rape, robbery, aggravated assault, burglary, larceny and motor vehicle theft) dropped 8.22 percent from 2013 to 2014, and the total of 3,863 Part I offenses was the lowest in the county since 1961, ACPD said.

“The historically low crime rate is a true testament to the partnership among the community and Police Department,” Police Chief Doug Scott said in a press release, his last as ACPD chief before his retirement became official this week. “We will continue make these partnerships even stronger as it has made our community safer.”

Arlington had one homicide last year — a domestic murder-suicide in December — and rape incidents increased from 26 in 2013 to 27 in 2014. Other crime categories all fell year-over-year:

“Even with crime rates at historic lows, the Arlington County Police Department will continue to actively patrol and maintain safety, and will attempt to identify causes for crimes so that they may be addressed,” ACPD spokesman Dustin Sternbeck said in the release.