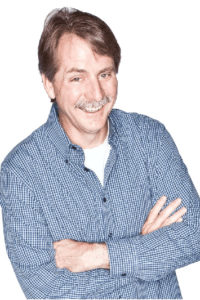 Comedian Jeff Foxworthy, best known for his “You might be a redneck if…” bit, is coming to Arlington on April 12 for a reflux disease and esophageal cancer awareness fundraiser.

The fundraiser will include stand-up comedy from Foxworthy and an opening act, determined by a nationwide competition, and it’s called “No Laughing Matter.” The event will be at the Crystal Gateway Marriott (1700 Jefferson Davis Highway) at 7:00 p.m., and tickets are on sale for between $79 and $790.

The fundraiser aims to educate people on the link between acid reflux disease and esophageal cancer, and it’s sponsored by the Esophageal Cancer Action Network.

Along with the chance to hear Foxworthy’s routine, attendees will get access to an open bar of beer and wine, “light fare” at their table and the chance to win prizes like a walk-on role on HBO’s “Veep” and a tour of the White House’s west wing.

VIP tickets are available for the chance to take photos and mingle with Foxworthy — plus get an additional 90 minutes of open bar — for $200.