Every once in a while I just want to share some of the great stuff that I’m drinking these days. There is so much great beer out there — here are just a few. 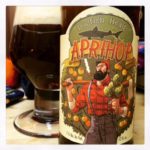 Aprihop is an IPA brewed with apricot juice, but it sure tastes like a fruity amber. That’s quite a compliment, actually. If Dogfish made this a big piney or even a grapefruit IPA with apricot, the delicate apricot would be lost. Instead, the hop bitterness accentuates the tart apricot flavor and is pleasantly balanced by a slight malty sweetness. In fact, it looks like an amber, too. Whatever you call it, it’s a delicious seasonal beer that won’t be around for long. Also, check out the great Paul Bunyan look alike on the label. 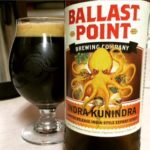 Ballast Point is a venerable West Coast brewery that regularly puts out quality hoppy beers that usually range from lagers to bright, fruity IPAs. But once in a while, they dabble in the dark arts of stouts and porters — their Victory at Sea Vanilla Porter is a hard one to beat. This stout is thinner than a dry Irish stout, but no worse for it. The first impression even when pouring it, is that Ballast Point means business with their addition of madras curry and cumin. That vivid array of aroma is all over the flavor, too. Only in the finish is the delicious spice balanced by the bittering of the dark malts. This one is made in limited quantities in collaboration with award-winning home brewer, Alex Tweet — get some while you can! 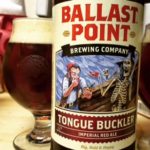 I wish that I’d had this beer a month ago when I wrote about ambers — its description won’t come as a surprise to any of you who read it. What sets it apart, though, is the booziness that comes through. The aroma is an enticing black tea and biscuit — balancing the hops with the malt that should be somewhat forward in a good red or amber. The flavor is quite complex until the alcohol kicks in. It goes from sweet to herbal from the hops to nearly astringent from the high alcohol. This is a strong ale — it borders on spirits — that’s definitely a mouth tingling experience. Like the Indra above, it’s only around for a limited time. 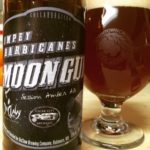 OK. This beer wins for my favorite name — to say, to write, to think about — but also for being the one beer that I wish that I had a sixer of. DuClaw is known for their flavorful beers — their Sweet Baby Jesus peanut butter porter is a favorite. Cigar City has its own enormous following — I can easily name their Jai Alai IPA as one of my favorite go-to IPAs. Together they’ve taken the often yawn-inducing session beer category and rocked it! Another amber that I could have happily included a month ago, this beer astonishes with its complexity. The aroma is primarily of floral hops with just a hint of the malt of an amber. The flavor is pretty true to a regular amber, but the hop bomb that this is blasts your palate! My favorite aspect of this beer came as it warmed — the bitter bite becomes more fruity like white grapefruit juice. Enjoy more than one without feeling overwhelmed!

Last, but not least… 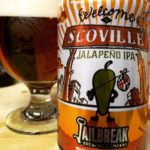 Located in Laurel, Md., Jailbreak has burst onto the local scene with solid beers. I mentioned their Infinite Amber Ale a month ago, and am psyched to say that it releases in cans this week! Their double IPA, Big Punisher has quickly become a local favorite, too. But, to me this Jalapeño IPA is the jewel in their crown. I had already decided to write about this beer before I got my March issue of Beer Advocate and saw that they gave Scoville an 86. While not on the scale of the 95 given to the Gigantic Ginormous Imperial IPA that I’m drinking as I write this, it feels like a score worth celebrating for a local upstart like Jailbreak! And, I love this beer. The aroma is an intoxicating blend of fresh jalapeño and floral hops. The flavor is all about the jalapeño without any of the spice, combined with sweet malt and mildly bitter hops. This is definitely not a hop heavy IPA. Instead it’s a flavorful beer that’s immensely drinkable. One just might not be enough!

Well, there it is. What beers are you loving?