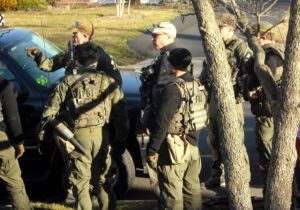 The agents were “executing search warrants as part of a bank robbery investigation,” according to FBI Washington Field Office spokeswoman Lindsay Godwin.

The raid happened at an apartment building near the intersection of Carlin Springs Road and N. Thomas Street around 4:00 p.m. Friday. The law enforcement show of force attracted considerable attention from neighbors, who emailed and tweeted ARLnow.com asking for additional information.

“About six suburbans of FBI with military fatigues just pulled into that area where the apartment building is on Carlin Springs and Thomas,” a resident, John Broehm, said in an email shortly after the raid. “There were lots of Arlington sheriffs there too. Although from their demeanor it seemed like it maybe was an exercise. No one seemed to be concerned about anything.”

“FBI turned from northbound Glebe onto Carlin Springs and pulled into the lot at that church between Glebe and Vermont/Park Drive,” Broehm said in a follow-up email, referring to the First Presbyterian Church of Arlington. “The guys in military gear got out and walked across the street to the apartment building where Arlington County Sheriff already was. But they were letting traffic and people go by on Carlin Springs.”