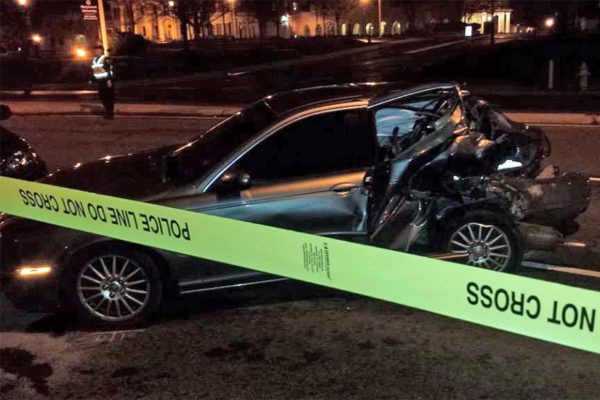 (Updated at 11:10 p.m.) One person is dead following a three-car accident on N. Glebe Road near Marymount University tonight.

Arlington 911 dispatchers received a call for a serious crash at the intersection of Glebe and Old Dominion Drive around 8:30 p.m. Friday. Paramedics arriving at the accident scene found one victim lying in the middle of the road, suffering traumatic injuries.

That person was pronounced dead on the scene, according to Arlington County Police Department spokesman Lt. Kip Malcolm.

It’s believed that there were no other occupants of either vehicle, Malcolm said. A third vehicle, in the southbound lanes, was reportedly struck by the Jaguar after it was rear-ended. No one in the third vehicle required hospitalization, according to Malcolm.

Arlington detectives and the county’s critical accident team are currently investigating the crash. All lanes of Glebe Road are closed at the scene, and are expected to remain closed for several hours. Westbound Old Dominion Drive is closed, and eastbound traffic is being diverted onto southbound Glebe.

The victim is a man in his late 40s, Malcolm said. Early in the investigation, his body was still lying on the roadway, covered with a sheet.